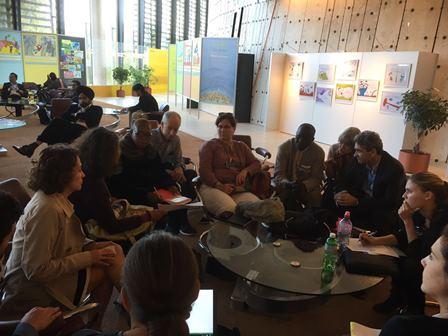 Representatives of La Via Campesina at the UN, pushing  for the Declaration on peasant’s rights

(Geneva, September 22, 2016) This week, representatives of La Via Campesina and supporting organizations  (FIAN, CETIM, CELS and IADL) are at the United Nations Human Rights Council of Geneva, in order to lobby for the Declaration of the Rights of Peasants and Other People Working in Rural Areas.

At the top of the agenda: increasing support for the report of the President of the Working Group on Peasant’s Rights and Other People Working in Rural Areas, Bolivian Ambassador Nardi Suxo.

During her report, the Ambassador highlighted the importance of this Declaration not only for peasants themselves, but also as a tool to improve overall socio-economic conditions. To this end, she stated that adoption of the Declaration would help the 2030 Agenda reach its objectives. During her presentation, Ambassador Suxo reaffirmed the need to protect and promote food sovereignty in rural areas. In order to do this, the full integration of peasants’ proposals (such as the promotion of small-scale agriculture) and the recognition of states’ obligations with regard to peasants’ fundamental rights are needed. Moreover, the Ambassador underscored the need to adopt new rights that could work as an effective shield for peasants’ rights and the recognition of the role of peasants in combatting climate change and protecting biodiversity. The Bolivian Ambassador will continue to work to generate synergies between governments, peasants’ organizations and civil society. This cooperation is fundamental to overcome the situation of discrimination currently faced by global peasantry.

The presentation of the report was followed by the intervention of many state delegations that endorsed the Declaration on the Rights of Peasants. The countries that spoke in favour of the Declaration were the following: South Africa (on behalf of the African group), Dominican Republic (for CELAC), Nicaragua (for a group of 22 countries), Ethiopia, Cuba, El Salvador, Switzerland, Venezuela, Nigeria, Indonesia, Bolivia, Ecuador, Libya, Egypt, Algeria, Nicaragua and Jordan.

After state interventions, members of La Via Campesina took the floor in support of the Declaration. Elizabeth Mpofu, International General Coordinator of La Via Campesina, addressed the Human Rights Council to expose the conditions of extreme poverty and discrimination of the peasantry worldwide, but especially in the Global South. It has become urgent to grant food sovereignty. Without Ndiakhate Fall, a peasant from Senegal and representative of La Via Campesina West-Africa, stressed the importance of the rights to water, land, seeds and biodiversity, as fundamental rights of the Declaration. Diego Monton from Argentina, a representative of CLOC and La Via Campesina Latin America, insisted on tackling the discrimination and repression that peasants are experiencing worldwide. Sandra Moreno, a representative of Sindicato Andaluz de Trabajadoras y Trabajadores and La Via Campesina Europe, explained how the industrial agricultural model promoted by big corporations is undermining peasantry, destroying their social and labour rights, and increasing the exploitation of workers, migrant workers and day labourers.

Delegates from La Via Campesina, together with allied organizations, are working to broaden support for the Declaration and mobilize as many countries as possible. Bilateral meetings with delegations from all over the world are taking place in order to raise awareness about the peasant issue. Our goal is to show that the defence of peasants’ rights is in everybody’s interest and that defending peasants means defending life and a sustainable world.