Home » “Nothing about us without us”, say peasants as the Farmers’ Rights Consultation begins in Bali 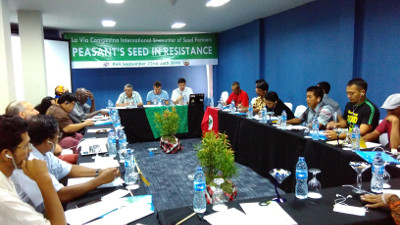 A delegation comprising peasants, women and men, indigenous people and youth from various regions of the world will represent La Via Campesina at the Farmers’ Rights Global Consultation, to be held between 27-30 of September in Bali, organized by the Government of Indonesia with support from The Government of Norway and The International Treaty on Plant Genetic Resources for Food and Agriculture (ITPGRFA).

Serikat Petani Indonesia (SPI), the Indonesian Peasants’ Union and a member of La Via Campesina is hosting the movement’s delegation coming from Asia, Africa, Europe and Latin America.

The Treaty, which is housed inside the Food and Agricultural Organisation (FAO) and despite its decade long existence, has done little to advance ‘farmers’ rights’, which is one of its key provisions.

In this regard, the delegation of rural peasants and indigenous people representing La Via Campesina will be calling upon the Treaty and the contracting parties (governments) to recognize and implement peasants’ rights and to reject the Intellectual Property Rights (IPR) legislations and patent laws that endanger food sovereignty.

The selected seeds kept by peasants in their fields are one of the irreplaceable pillars of food production. Peasants all over the world have been aware of this throughout the centuries. It is one of the most universal and basic understandings that all peasants share. Except in those cases where they have suffered external aggressions or extreme circumstances, almost all peasant communities know how to save, store and share seeds. Millions of families and farming communities have worked to create hundreds of crops and thousands of varieties of these crops. The regular exchange of seeds among communities and peoples has allowed crops to adapt to different conditions, climates and topographies. This is what has allowed farming to spread and grow and feed the world with a diversified diet.

Therefore, peasants’ unconditional and unrestricted access to a diverse range of peasant seeds and their right to keep, use, exchange and sell farm seeds is the first condition necessary for feeding the world. In defense of the peasant-seed systems, at the consultation, La Via Campesina delegation will speak for the right to protect traditional and modern peasant knowhow and defend it from the assault of IPR laws.

Right here in Indonesia where the consultation is taking place, peasants in East Java have been criminalised for allegedly infringing the rights of a company called BISI, the subsidiary of Thai seed company Charoen Pokhpand. Although BISI has produced no evidence, farmers have been summoned to court and fourteen of them have been prosecuted; there have even been short jail sentences[1]. In most cases, these farmers did not have a lawyer to represent them and they did not understand what they had done wrong. There are numerous such examples worldwide, of criminalization of peasants by the industry in the name of patents and intellectual property. It is this blatant violation of peasants’ rights that La Via Campesina will challenge at the Global Consultation.

The delegation will also emphasise that the peasant participation in decision making must not be reduced to the inclusion of a few organisations who bow to pressure from the industry and accept decisions already made. Furthermore, participation must not also not be reduced to just big landholders, but must include women, indigenous people, landless peasants, landless agricultural workers, fisherfolk and pastoralists.

La Via Campesina urges the Treaty and the Contracting parties to look at progressive laws that are passed in various regions of the world, the most recent being the one passed by the Government of Venezuela[2] early this year, which upholds national food sovereignty, regulate the production of hybrid seed, and rejects the production, distribution and import of GMO seed. Governments of Indonesia, Mali, Nepal and several others have already adopted food sovereignty as a principle, some of them even enacting this into law (e.g. Indonesia).

La Via Campesina also demands that the ‘Benefit-Sharing Fund’ must not finance research institutions and other institutions devoted to collecting peasant seeds and knowhow and other genetic information aimed at facilitating the excise of patents. Instead, it must directly finance small peasant organisations that select, produce and conserve their seeds locally, the best peasant conservation field or long duration techniques (for example without electricity), researchers who collaborate in this collective work under the direction of these farmers and exchanges of associated peasant knowhow on a national and international level.

To know more about La Via Campesina visit: www.viacampesina.org