Home » Peasants Movements to FAO : “Act for people, not for TNCs!” 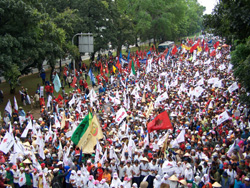 (Jakarta, 18 May 2006) Farmers movements from all over Asia and the Pacific gathered in Jakarta are asking the FAO regional ministerial conference starting today to take concrete decisions to support small farmers in the region.  Those movements coming from the Philippines, Thailand, South Korea, Japan, India, Sri Lanka, Nepal, Bangladesh, USA, Indonesia, Vietnam and Timor Leste are members of La Via Campesina, an international peasants organisation that has members in 56 countries.

The farmers are asking the FAO to adopt the concept of Food Sovereignty: the rights of the people to chose their own agricultural policies, and to protect their food markets. As a result of trade liberalisation, farmers from every countries are fighting against each others in the name of competition. This system weakens the farmers and create poverty.

Farmers are also urging the FAO to promote genuine agrarian reform. Access to land for small farmers is the basis of food production and poverty reduction in rural areas. FAO should make concrete steps to implement its commitments made at the International Conference on Agrarian Reform and Rural Development held in Brazil last month.

If the FAO and the member governments are really committed to reduce hunger and poverty, they have to listen to the voices and the demands of people’s organisations.

Farmers groups and civil society organisations concluded today the “Asia Pacific People Conference on Rice and Food Sovereignty” (May 14-18, Jakarta). They produced a declaration stressing the importance of rice for Asian people’s livelihood and cultures. They reaffirm their will to implement food sovereignty at every level of the food chain: starting from the access to natural resources (mainly land, water and seeds) to the choice of the production model (ecological instead of chemical agriculture), and the kind of trade that we want. Free trade promoted by the WTO and the Free Trade Agreements have destroyed farmers lives.

Farmers are urging the FAO to to ACT for the well being for the majority of the citizens and not for the profit of the transnational companies (TNCs).