Monday 15 May, 2006 – 10am-11am
Restaurant Ariana, 83, Rue de Monbrillant – 1202 Geneva
While the WTO General Council is discussing the modalities of the Doha Round, farmers are being kicked out of their land by neoliberal policies. The Doha Round is based on the assumption that free trade will contribute to development and alleviate poverty. However, farmers’ experience with trade liberalisation is that of increased marginalisation, poverty, exile and even death. 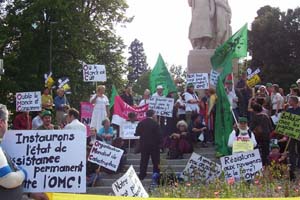 Farmers organisations members of the international movement La Via Campesina are giving testimonies about how they have been affected by the current WTO policies: in Thailand, farmers have fallen into the debt trap; in India, thousands of peasants have committed suicide because of rising costs of production and falling prices; in Korea, farmers are driven to despair due to the import of cheap food; in Europe: one farm disappears every three minutes…

During the WTO ministerial conference in Hong Kong (December 2005), around 900 protestors, mainly farmers of La Via Campesina, were arrested because they were defending their right to live.

Worldwide, farmers movements are being criminalised in their struggle for their rights, for their land and their livelihood. On May 15 in Geneva, the international delegation of La Via Campesina will expose its position on the current WTO negotiation and launch its annual report on peasant’s rights violations (“Violation of peasant’s human rights – A report on Cases and Patterns of Violations 2006”).

Notes to the press: