THE ASIA PACIFIC PEOPLE CONFERENCE ON RICE AND FOOD SOVEREIGNTY 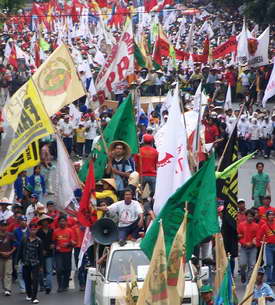 We, peasants from Asia and Pacific, civil society organizations and NGOs have gathered for the Asia Pacific People’s Conference on Rice and Food Sovereignty organized by La Via Campesina and hosted by Federation of Indonesia Peasant Union (FSPI) in Jakarta 14-18 May 2006. We are sharing our experiences on the issues of rice and how to implement food sovereignty in our countries.

We recognize that food and agriculture is fundamental for the people, especially when we consider the issue of rice in Asia Pacific. Many rice farmers in the region are now hungry or sinking into debt, and therefore their livelihood is threatened. This situation is also promoted by international institution such as the WTO, IMF and the World Bank. On the other hand, these institutions are also promoting export-oriented rice production, and monopoly control by transnational corporations. This has been endangering rice farmer’s life in Asia Pacific.

Rice is Life, Culture and Dignity

We the peasants from Asia and Pacific strongly voice our right to have a better life, to preserve our cultures, and protect the dignity of the people. Rice has been our staple food for centuries, so it is a political issue. Therefore, we demand food sovereignty for the people. Farmers should have the rights to produce food in a sustainable way and be protected from neo-liberal policies. Food sovereignty should prevail over free trade.

We gathered to formulate the principles of food sovereignty on rice. We urge our governments to adopt policies promoting and supporting sustainable rice production and family-farm based production rather than agro-industry, export-oriented, and high-input rice production. During our discussions, we realized that people’s food sovereignty should be implemented at different level: the access and control over natural resources (land, water and seeds), the choice of the mode of production and consumption, and the kind of trade that we want.

1.    Land, Water and Seeds
·    We demand a genuine agrarian reform that focuses on land distribution to the landless people and provides possibilities for farmers to retain land in their possession.
·    Land to the tiller: the land should belong to the small and landless people, and not to landlords and big companies.
·    Land and water have to be owned by the local communities with all respect to the community’s legal and customary rights to their local and traditional resources.
·    It is not enough to have some positive laws. In Asia and Pacific, many countries have agrarian laws, but they are not implemented. Social movements have to be able to pressurize and monitor the implementation of the laws.
·    Women should have the equal right in terms of their access to land water and other productive resources.
·    We condemn the privatization of water; because water is now being controlled by MNCs. Governments have to protect their farmers in order to provide them with free irrigation access for production.
·    We should be protected from the pollution of the water sources by the industry and chemical farming, especially in rice production systems.
·    Seeds are at the heart of agriculture, they are the basis of food sovereignty. We should abolish all patents on seeds, as well as reject any means, system or technology that prevents farmers from saving, improving, and reproducing seeds. We categorically say no to terminator technology on seeds that curtails this freedom.
·    Encourage the right to exchange and reproduce seeds by the people and for the people. Seeds can not to be distributed by the MNCs and the governments, as they will make farmers as only the end-user of the chain of seed production.
·    Abolish GMOs and ban its production and trade in rice seed.

2.    Rice production systems
·    We condemn the green revolution because it destroys biodiversity, it foster dependency on chemicals, and leads to environmental degradation and displaces many small farmers from their livelihoods and land.
·    We promote sustainable rice production such as organic and natural farming: they use less input and produce better quality outputs.
·    Encourage the revival of traditional experience on sustainable rice production systems, for instance the natural farming in India (Karnataka).
·    Recognize the importance of food sovereignty in terms of nature and ecology in order to create poverty eradication, protecting ecosystem, land preservation, biodiversity, improving health condition, increasing water quality and food at affordable cost.
·    Establish rice quality criteria in favor of people’s preferences and needs.
·    Strongly push our governments to give support to organizations who promote sustainable agriculture, and to set up formal policies to promote sustainable rice production systems.

3.    Post harvest activities and processing
·    Develop local rice economies based on local production and processing by farmers.
·    Processing activities and local trade should be managed by small family units, with cheap and people adapted technologies.
·    The governments should provide services program supporting production and land productivity. They should also facilitate post harvest activities.

4.    Trade
·    We should ensure adequate remunerative prices and the government should guarantee it through subsidy to cover the costs of production and also to get adequate profit which are related to the cost of living of the farmer.
·    Abolish all direct and indirect export subsidies, and ask the government to give subsidy for promoting sustainable rice production, and make sure that the subsidies not to go to the MNCs and large producers.
·    The governments must support farmers who produce rice for domestic needs.
·    Domestic production should be regulated to prevent surpluses.
·    Ban rice imports when countries can produce enough for their own consumption. Most of the time, rice imports are only surpluses dumped on our countries and they kill farmers.
·    Promoting family-based rice farming to ensure the domestic rice need and self-sufficiency. We condemn the liberalization of rice trade pushed by the WTO and the Free Trade Agreements. And we demand that WTO out from food and agriculture.

Rice is not only a commodity: it is life, culture and dignity!