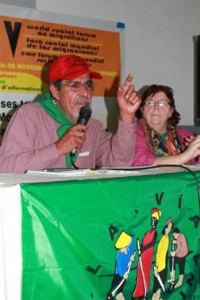 [MANILA, 28 November 2012] The 5th World Social Forum on Migrations is happening with many historic firsts from 26-30 November 2012. It is the first time the World Social Forum on Migrations has come to Asia. This is also the first forum with the biggest diversity of participants: more than 800 hundred peope are coming from countries and regions from all over the world. There are representatives of not only migrants movements but also of peasants, trade unions and indigenous peoples.

La Via Campesina, the international peasants movement with over 200 million members worldwide, have always stood in solidarity with migrants movements around the world. We are proud to work together with migrant movements in this monumental World Social Forum on Migrations in Manila, the Philippines.

Since the 4th La Via Campesina International Conference in Itaici, Brazil, we have included the question of migrations as part of the key points for the elaboration of our strategies in the global peasants’ struggles. We continue this here in the World Social Forum by echoing our strong alliance with migrants movements.

For La Via Campesina, it is clear that forced migration, the movement of millions of women and men to escape hunger, poverty, persecution, violence, plunder and societies that exclude them, is directly intensified by the neoliberal capitalist system. The destruction of peasant agriculture and rural communities continue to be a main factor of migration. Coupled with this is that hunger and poverty are still predominantly rural—so rural people migrate in order to escape those grave problems.

“In reality, many migrants are peasants who have been displaced by the capitalist system and forced to migrate. For instance, eight of ten agrucultural workers in the U.S. are Mexican migrants—poor peasants that cannot survive on their own land and are forced to cross the border to look for work,” says Carlos Marentes, director of the Border Agricultural Workers Project from the United States, member of La Via Campesina.

As a peasant and rural worker movement, La Via Campesina understands very well the impacts of neoliberal policies and the capitalist system and have identified with the struggles of migrants around the world.

At the same time, we also need to work hand-in-hand to address the issues of the rights of migrants. Violations of rights suffered by migrants today are also caused by the same system—a system that also exploits peasants, workers, and poor people globally.

An example of this unity and solidarity between peasants and migrants happened in 2005 when La Via Campesina and numerous migrants movements, together with trade unions and several other Asian social movements were united in a key joint struggle. This multi-sectoral unity mounted a massive mobilization in Hong Kong against the then dominant symbol of neoliberalism – the World Trade Organization. It was a brilliant expression of solidarity amongst the different movements in Asia. It also showed to the world the great potential of power of the unity of peasants, migrants, workers, women, youth and other popular sectors.

The World Social Forum on Migrations plays a crucial role in creating spaces for peoples movements to be able to take strategic steps forward, look for alternatives, and extend solidarity among movements. It is an important place to learn about each others ideas and initiatives. It is also an important momentum for us movements to strengthen our struggles together.

We then reaffirm our strong commitment to continue building an international unity of peasants and migrants for the full realization of the rights of all migrants.

La Via Campesina has a delegation of peasant leaders from Indonesia, South Korea, India and the United States present in Manila.

For interviews with them, please contact Mary Lou Malig at +63 9189456353 or marylouisemalig@gmail.com