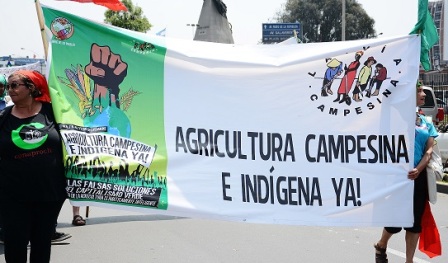 A delegation from the Latin American Coordination of Rural Organisations (CLOC) and the Via Campesina International participated in the Peoples’ Summit on Climate Change in Lima, which culminated, on December 10th, in a march of 10,000 people through the centre of the city.  At the closing ceremony, Diego Montón, the representative of the CLOC Secretariat, declared, “We, women and men, peasants and small farmers, have a long history of struggle. We have been struggling against evictions, against land clearances, against the large mining companies that pollute our water, against the contamination that is caused by toxic chemical inputs, against the destruction of our food production systems.”

Furthermore, Montón added, “We leave here with a task ahead of us … we have to see that all over the world our peoples are in the streets – saying No to capitalism and Yes to our proposal, which is Good Living (Buen Vivir), which is popular socialism, a model in which life, diversity, culture, and pluralism take precedence over capital and money.”

For his part, the Haitian leader Chavannes Jean-Baptiste, a member of the  Via Campesina’s International Coordinating Committee and of the Political Commission of the CLOC, said in an interview with Minga Informativa that the Via Campesina and the CLOC had come together in Lima in order to denounce the false solutions that transnational companies and the governments of the industrialised countries are proposing, “such as climate-smart agriculture, the carbon market, REDD (Reducing Emissions from Deforestation and Forest Degradation) projects, land-grabbing, and the production of agro-fuel.”

He stated that these false solutions are going to worsen the climate situation.  “We are here to say that it is not the climate that has to be changed; what has to be changed is the capitalist system. Because global warming is a result of the takeover of natural resources by  Green Capitalism.” The leader stressed that promoting peasant and small-scale agroecological agriculture is the route to producing a healthy food supply for the world’s population, “which is now 7 billion persons – of whom 2 billion still cannot eat well.” He reiterated that with peasant and small-scale agriculture not only can we produce enough food but we can “take care of Mother Earth and ensure the future of the generations to come, while at the same time cooling down the planet.”

Jean-Baptiste was quite sceptical, however, with regard to there being any openness to these proposals within the official COP 20 negotiations.  Although he acknowledged that some governments view the proposals with a sympathetic eye, he said that they “say that agriculture is a sensitive issue; governments do not want to get involved with it; they say that it is a very technical subject. We know that the FAO is manipulated by the countries of the North that are defending Green Capitalism and by multinational companies that have access to high officials at the FAO. We know that the FAO is defending climate-smart agriculture, and we are against that approach. It is a way of using the climate issue to deceive the world’s peoples and to continue to lay waste to natural resources, because it is the multinationals that have the upper hand there (in the COP) and that are manipulating the governments, and the popular sectors have no influence inside (the COP negotiations)”, he noted.

With respect to climate-smart agriculture, the Haitian leader explained to us that, despite the fact that it is presented as a combination of agroecology and industrial agriculture, what it is really about is “enriching the multinationals, selling climate-resistant genetically-modified seeds, pesticides, herbicides, things of that sort; it is a trap.” He considers it a concept that is “quite empty, one in which there is room for everything …. For the Via Campesina, it is the same process that began with the Green Revolution and that continues to develop chemical pesticides, starting from hybrid seeds and, nowadays, genetically-modified seeds; it is the same process that the World Bank is appropriating in order to develop industrial agriculture.” Jean-Baptiste adds that it is deceitful to say that climate-smart agriculture is going to solve world hunger and at the same time to combat global warming, when in fact it is simply “a ‘modified’ face of industrial agriculture which is going to continue to grab land, water, and energy – and which will end up producing less. It is a form of re-colonisation.”  He stressed that what is most important is to continue to stimulate and support the productivity of small-scale agroecological agriculture.