Home » La Via campesina demands the release of Huber Ballesteros 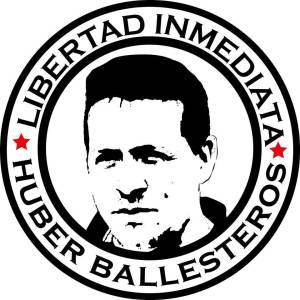 Huber Ballesteros is one of the best known trade unionists and human rights activists in Colombia.

He is also one of those who have been the most threatened.

Huber was arrested on August 25th, 2013, and accused of “rebellion” and of “financing terrorism.

He has not yet been brought to trial. Huber is the vice-president of FENSUAGRO, one of the largest unions in
Colombia and one of the most persecuted by the government. In recent years, more than 1000 members of FENSUAGRO have been assassinated.

We believe that Huber has been targeted because of his activism, and we are demanding his unconditional release from detention, as well as the release of all the other political prisoners in Colombia.

Please take a moment to send a message of protest to the Colombian government.
http://www.labourstartcampaigns.net/show_campaign.cgi?c=2606