Home » Our land is worth more than carbon: Civil Society Statement | COP 22 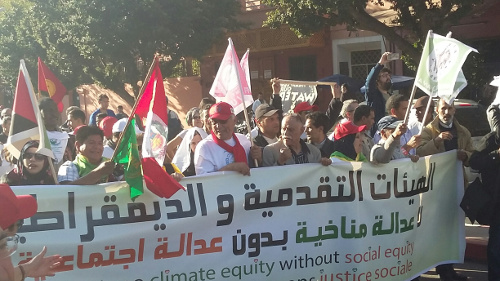 The Paris Agreement required the 196 Parties to the UN Climate Convention to limit temperature increases to 2° or 1.5°C below preindustrial levels. While COP21 benefitted from a high degree of mobilization linked to the adoption of an international agreement, COP 22 on the other hand has received rather less attention.

Yet the stakes remain significant.

In its haste, COP 22, being called the “action COP” or the “agriculture COP”, is in danger of adopting various misguided solutions for agriculture. Last May at the Climate Convention HQ in Bonn, discussion on this sector was a source of tension between countries. They studiously avoided the key question of differentiating between agricultural models according to their impact on climate change and their ability to provide food sovereignty to people. At the same time, and outside official negotiating channels, voluntary initiatives, especially in the private sector, have expanded and may well become incorporated in countries’ future public policies.

Although 94% of countries mention agriculture in their strategies for combating climate change, the Paris Agreement fails to mention the word “agriculture” even once. You have to read between the lines to understand what is really at stake.

It is really the highly political subject of agriculture that hides behind the use of the expression “carbon sink”. It is true that the soil plays an important role in sequestering CO2 (carbon dioxide), turning it into a genuine “carbon sink”, like forests. Yet that is not soil’s only role, particularly if farming land that is central to food sovereignty is involved. Unfortunately its use (employing the expression “land use”) in combating climate change represents a huge opportunity currently for those promoting misguided solutions and serves as an excuse for public inaction.

In searching for a balance between emissions and absorption by greenhouse gas sinks, the Paris Agreement enshrined the principle of compensation in dealing with the climate crisis. This notion does not mean that emissions actually have to decrease but that emissions and absorption can cancel each other out. This approach has already begun with forests through the highly controversial REDD+ mechanism and, to an increasing degree, is now targeting farming land, the new carbon Eldorado.

We must remember that unlike avoided emissions, natural carbon sequestration is reversible and has a limited lifetime. So rather than attempting to reduce greenhouse gas emissions drastically, agriculture is becoming a unit of accounting permitting emissions to continue or even increase. Consequently, though roundly condemned by civil society and social movements, various initiatives have arisen around climate discussions that appear to many to be misguided solutions. This is the case with climate-smart agriculture and its global alliance (GACSA) which, in the absence of clear criteria, does a balancing act between promoting agroecology and the use of GM seeds and their herbicides. Moreover, 60% of GACSA’s private sector members are companies in the pesticide and agricultural input sector.

This alliance and its concept are nothing more than an empty shell that agro-industrial multinationals can hide in to continue the industrialization of agriculture, to the detriment of smallholders.

Similarly, the 4 per 1000 initiative fails to make clear choices in promoting transition in farming systems. Its scattergun approach to the problem fails to take account of considerations beyond carbon sequestration such as the use of herbicides for example.

Unless there is a real re-examination of agro-industrial models that are highly dependent on chemical inputs and based on exports, such initiatives have absolutely no place in the list of solutions.

Quite apart from the question of the agricultural model there is also the danger of pressure on land and the financialization of natural resources. Therefore by putting a value, through compensation, on farming land as a tool in combating climate change, you increase the pressure on it. So the small scale farmers who were already the first victims of climate change become doubly threatened. If we are to encourage investment in agriculture to sequester more carbon, especially from private sources, much greater expanses of land will be needed with an increased risk of land grabbing. This danger would be multiplied if the race for land were accompanied by mechanisms linked to carbon finance. Numerous studies on similar mechanisms developed for forests (like REDD+) have already demonstrated the dangers of an approach that pays scant consideration to protecting human rights. This approach to combating climate change opens the door ever wider to endangering small scale farmers’ rights and their acquired knowledge, food sovereignty and ecosystem integrity.

Our organisations deprecate this rush towards compensation to tackle the climate crisis. Only immediate, drastic reduction of greenhouse gases will prevent a dramatic increase in the impact of this crisis even though it will still only limit it. Farming land cannot become an accounting tool for managing the climate crisis. It is fundamental to around a billion people in the world who are working towards food sovereignty, an inalienable right of people who have already been harmed enough. We support the continued existence of agriculture suited to meeting the agricultural challenges already magnified by the climate crisis. Such farming methods, based on peasant agroecology which, in addition to a store of good practice, imply socially- and ecologically-based farming rooted in its home territory and a rejection of the financialization of Nature.