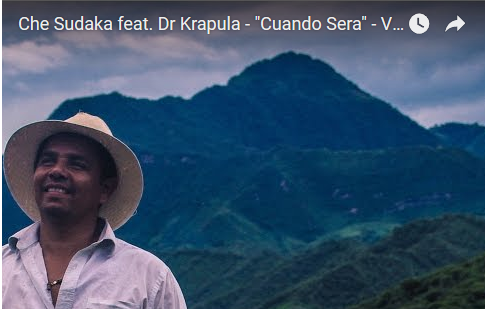 Colombian-Argentine music group Che Sudaka, which is based in Barcelona has released a new music video “Cuando Sera” as part of their album “Hoy” and has dedicated the song to La Via Campesina’s peaceful struggle for food sovereignty and social justice.

The song was inspired by the events during the National Agricultural Parade in Colombia in 2013, which was attended by peasant movements, artisanal miners, transporters, health workers, students, and with the support of trade union centers and popular organizations. The parade brought attention to the perils of Free Trade Agreement (FTA) signed by Colombia, that restricted peasants from using seeds from their own harvest and tilted agriculture in favor of multinationals like Monsanto. The song was made in collaboration with Subcantante Mario and David Jaramillo, members of the Colombian group Doctor Krápula.

The music video points to the incalculable danger facing mankind, brought about by a few multinational corporations to seize control of seeds, food, water and land around the world. At the same time, the song wants to give hope and calls for unity and support from all sections of the society as it recognizes the indispensable role that small farmers have in our lives and that of our future generations.