Home » La Via Campesina says ‘Not one less’: No more violence against women! 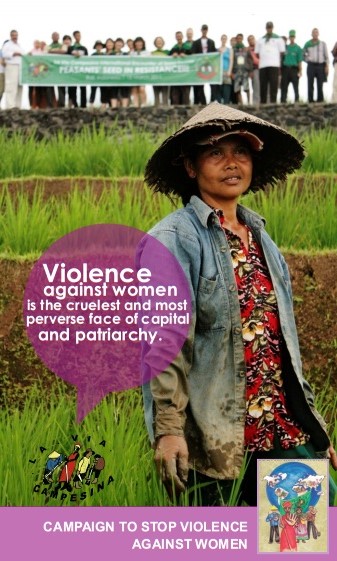 (Harare, 17 November 2016) On the 25th November, the International Day of Struggle against violence against women;  The Via Campesina will reaffirm its commitment to the struggles for equal rights and human dignity.

We as women carry enormous responsibilities in this world, and feed entire nations using agroecological practices, without our economic, social, legal and political rights being recognised, and without public programmes to guarantee equal social and economic participation.For this reason we are making a global call to our organisations, allies and friends to join forces to support actions, mobilisations and activities to denounce the different types of violence faced by women and to criticise the capitalist patriarchal model and the encroachment of agribusiness in our territories.

On this day of struggle we join the voices of millions of women who came together in Latin America on 19th October to shout  “Not one less, we want us alive”  to denounce the alarming growth in femicide[1] and male-chauvinist and misogynist violence against women. Femicide stems from the structural inequality between women and men, and the domination of men over women; gender violence is a mechanism for these factors to reproduce oppression and discrimination against women.

There is an urgent need for both women and men to organise in a common front to fight against all types of violence and oppression.To this end, on 25th November we are using our international campaign “No more violence against women”, started in 2008, as a tool to denounce and highlight  this systematic violence faced by women around the world.

Now more than ever, we are pushing forward in the struggle for a new relationship between women and men and between human beings and mother earth.We must engage in our struggles, transform society and build a better world through training, organisation and mobilisation, taking into account the specific situations that we face as women in a world where we do not have equality with men.

Food sovereignty is the political project on which we can build social relations based on substantive equality. We need to eradicate all types of discrimination based on ethnicity, sexual orientation, gender, age, disability or any other factor. The feminist approach of food sovereignty helps transform reality, building on emancipation and social justice, and it allows us to show women as the protagonists who are improving the situation; this helps transform unequal power relations.

The capitalist system that has generated poverty and exclusion throughout history affects women in a more perverse and violent way, particularly the poorest, who live in rural areas and on the outskirts of cities.The climate crisis and abusive exploitation of natural resources are taking us towards an ecological disaster and oppression of the peoples of the world. We believe that all of us, women and men, must come together in a joint struggle to save the planet and change the system.

There is now evidence that states do not take the political approach of reducing and eradicating violence against women. This violence is manifested in sexual abuse, harassment in organisations and on the street, rape, and institutional, psychological and structural violence. We call on states to ensure that legal frameworks for the safety, protection and freedom of women are respected. We will continue the struggle to occupy decision-making spaces in all national structures with the same capacity and legitimacy as men.

We also demand that churches, the media and states should not seek to control our bodies using religious fundamentalism and trying to limit us to the home. We raise a shout of resistance against all forms of exploitation of our bodies and our territories!

We pledge that we will struggle together as women and men for social and gender justice until each woman can move freely and without fear, in the home, in the community and around the world.

During this day of action we want to demonstrate unity and our capacity to mobilise in different territories. Please send us messages, photos, videos and audio recordings to share on our website www.viacampesina.org

No more violence against women!

Not a minute of silence for our dead – a lifetime of struggle!

Photos and audio: See our new collection of “No more violence against women!” postcards (Spanish)

[1]  “Femicide is one of the most extreme forms of gender violence, which in its various forms includes all misogynist violence against women, that violates their human rights, attacks their security and puts their lives at risk. It culminates in the murder of some girls and women. Femicide happens because the authorities fail to act, they are negligent or they collude with aggressors, and in this way carry out institutional violence against women by blocking their access to justice and contributing to impunity”.