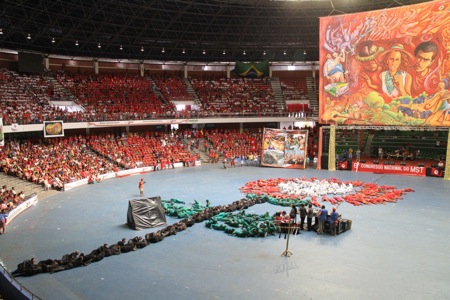 February 10, 2014. This is a history that is too large to fit in a book, unless this book could be as large as actors who know how to make history.  The pages of this book are huge, and were opened in front of 15 thousand people, remembering a remarkable trajectory of social and political struggle in Brazil.

The VI National MST Congress opened officially this Monday morning (Feb 10). The opening mistica, which is always a highly anticipated moment because of its energy, moved millions of people who filled the Nilson gymnasium in Brasília.

Men, women, youth and children from 23 states and the Federal District and more than 200 international guests, saw the people turn the pages of this important historical process.

The opening mística was organized by the MST state coordination of Paraná, a state that represents the historical cradle of the movement. The mistica involved more than 1500 participants and was divided into five scenes. Each act was announced as one of the huge pages of the book. The book was four meters high and its pages were only turned through a collective effort. 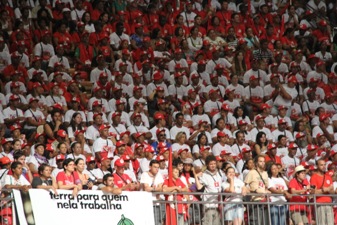 The performance started with the presentation of the history in the eighties, when the military government, at the time of its death-rattle, still tried to continue to wreak havoc upon the people. Labourers, urban workers, indigenous people and landless peasants, from the city and the countryside, emerged in new organizations. The suppressor state with its military at one side, tried to impose its will. The people were stronger and expelled the armed forces from power.

The rural population returned to organize. In 1984 the MST was born. Painted bodies, now actors of the history, write their own destiny, with the slogan: “occupy, resist and produce”, the landless workers break through the fence of latifundio, occupying the land.  The struggle for Agrarian Reform returns with lot of strength as a political agenda of the country.

MST launched an organization whose form was popular, based on four fundamental pillars: collective leadership, unity, bond with the base (grass-roots) and study-and- work, undeterred and feared by the ruling forces.

Land occupations are political gestures and acts of transformation. The economic powers could not tolerate this and physical resistance burst all over the country. Bursts of gunfire hit hearts, but the people united always stands up: “our nerves are of ice, but our hearts vomit fire. The comrades that died in the blood are immortal in our memory”. How to forget the killings in Carajás, Corumbiara and Felisburgo, or the struggle of the comrades like Roseli Nunes, Dorcelina Folador, Fusquinha, Keno, Cícero, Egídio Brunneto and many others?!

The presence of more than 200 international invited comrades is an indication of the support, prestige and, mainly, the solidarity that MST awakens in many countries and also among other popular organizations in Brazil. Latin-American, African and European flags, as well as flags of peasants from the Via Campesina were present at the opening.

The MST reaffirms its struggle and its internationalist vocation as a fundamental page of its history. “Solidarity is the cement in the building of our movement, established with other populations of Brazil and the world. We need solidarity to confront the transnational capitalists of agribusiness and to struggle for another agricultural model”, affirmed Diego Moreira, member of the national MST leadership, at the saluting at the Congress. The Congress will be held through this Friday (Feb 14). But the Congress started over two years ago, with discussions and reflections, which conducts the main mass movement of Brazil; to guide its forces in favour of popular agrarian reform,  the theme of the last act of the mística.  Popular agrarian reform should return to the people the most precious goods of this planet, which do not belong to individuals, goods such as water, air, healthy land, seeds and forests, to democratize access to land and to radically change this economic model that destroys the land.

The MST sees itself in this way and renews and broadens its commitments in defense of food sovereignty, the production of healthy food, agro-ecology, the preservation of nature, the rights of indigenous people and quilombolas, equality between men and women, and freedom for the youth.