Home » MST’s youth define struggles for the next period 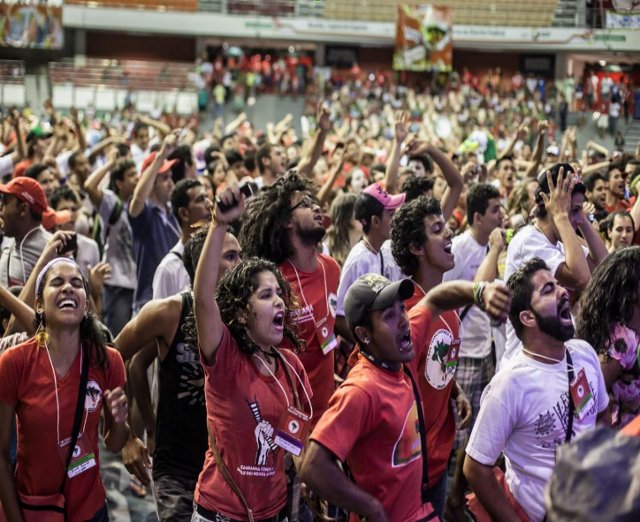 11th February 2014,  The challenge of being the sons and daughters of Latin America’s largest organized movement. It is an honour and a responsibility to be heir to 30 years of struggle and resistance.

The desire to follow in the footsteps of those hardened feet which broke barriers and conquered land. And to move the production and self-organization of MST’s camps and settlements forwards.

The 3rd National MST’s Youth Assembly, which took place on Monday (10/02) during the 6th MST Congress, began with poetry, music and theatre, all full of the characteristic energy of the fighting youth.

The political tone came through straight away, with familiar themes and interventions from associated movements. Hellen Lima, of Levante Popular da Joventude, reaffirmed the need for strength, courage and discipline for the next period.

“Young people have shown that they are not satisfied with the model of society that capitalism imposes on us, a model of death. We need to push forward with structural reforms and advance in our life projects. We must seize the present and hold onto our past to achieve the changes we want.”

Other movements spoke of the feeling of unity, like Alfredo, national secretary of CUT’s (Unified Workers’ Central) Youth. “For us at CUT, it is very clear that there is a division between the rural movement and the urban movement.”

“Together we make up the working class and together, we will achieve true transformations.” Also present were Cleitinho, of the Pastoral Ministry of Rural Youth (PJR) and Virgínia Barros, President of the National Union of Students (UNE).

Questions were asked to prompt collective reflection: “Our generation, our youth, what are we ready to build? Is MST Youth going to be an active political actor or are we going to be one more page of history?” asked Thaile Lopes, meeting coordinator.

Miguel Stédile, of the MST national coordination, echoed the questions. “Friends, I was lucky enough to be here at the march of 1997, when MST arrived at the capital with 100 000 people in a demonstration that was so well organised that even the army affirmed that they would not be able to do the same, moving from one city to another, every day. The national directorate is not here to tell you what to do. The national directorate is here to listen to what we are going to build”.

In response, the Manifesto of the Landless Youth in the Struggle for the People’s Agrarian Reform was presented. The Manifesto includes the commitment to fight with intransigence against class enemies, to continue in the mass struggle and in the collective organisation of MST and to build up political unity in the Left.

The meeting ended with a collective oath, in which the youth affirmed: “We promise that we will not go back, even by one centimetre, on our decision to fight!”