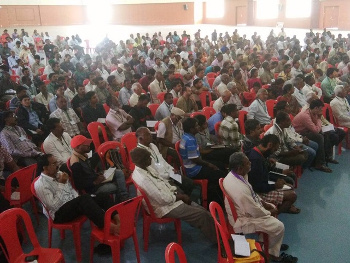 Masses of people gathered together is not an unusual sight in India; this is common at religious events or political mobilizations. But to see thousands of farmers come together to attend a class on ecological farming is extraordinary. One such class is taking place at the Muruga Matha, a religious institution in southern Karnataka, where a five-day intensive study camp on a chemical-free farming method called Zero Budget Natural Farming (ZBNF) is taking place.

The Zero Budget movement has already organized some 100 such camps over the last decade in Karnataka state alone, with an average participation of a 1000-5000 farmers each.

Such huge, volunteer-organized farmer training camps are unprecedented in the country, and perhaps anywhere else in the world. They are possible because of the collective dynamic found in social movements, where lots of rural volunteers, farmers’ organizations, local activists, religious leaders, and other members of society come together and pool in resources like food, venue, time, volunteers, to promote this chemical-free and debt-free method for the farming community.

Shri Subhash Palekar, called the guru of ZBNF by its followers, innovated the toolkit of ZBNF practices by careful observation of nature, indigenous farming methods, and decades of experiments on his own farm in Maharashtra.  He is personally carrying out the training session. Palekar received one of India’s highest civilian awards–the Padma Shri–last year, in recognition of his efforts, making him the first farmer to receive such an award.

‘Zero budget’ natural farming aims to drastically cut production costs by ending dependence on all outside inputs and loans for farming. The word ‘budget’ refers to credit and expenses, thus the phrase ‘Zero Budget’ means without using any credit, and without spending any money on purchased inputs. ‘Natural farming’ means farming with Nature and without chemicals.

Indian farmers are reeling under a crisis of farmer’s suicides that are a result of indebtedness among farmers of all sizes. ZBNF presents itself as a direct solution to the farmer suicide crisis, as well as the climate crisis, and water crisis. The amount of water needed to practice ZBNF is less than half of that needed for chemical farming. “No ZBNF farmer has ever committed suicide or gone into debt,” said Chukki Nanjundaswamy of Amrita Bhoomi.

Amrita Bhoomi has been a long time promoter of ZBNF and agroecology and also brought many of its peasant seeds to the event. It will soon start large-scale distribution of peasant seeds among farmers.