Home » What do love letters have to do with farming? 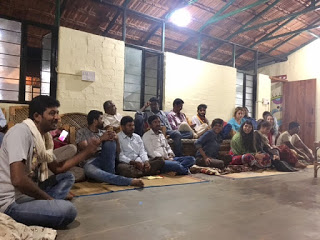 Writing love letters may seem like an unusual activity for a course on farming and agroecology. But, in this course, young farmer-students proposed to their imaginary partners in their letters, commenting on their realizations about gender. “I realized that we place so many conditions on women,” wrote one student. A key reflection of the entire course was that shifting to agroecology and sustainable agriculture isn’t just about a change in production models, its as much about changing the relationships we have–including between genders.

Indians, as is the case in many countries around the world, have unrealistic expectations of women, and this is especially evident in the marriage market – women should be light skinned, they should be conventionally attractive, they should be educated but be ready to turn into submissive housewives, they should uphold caste norms, they should know how to cook and clean, and on and on. Rarely do women have a say in any important decision concerning their own lives.

In a class mostly constituted of young men from conservative rural backgrounds, students rarely have the space to social issues like these. Students approached gender by analyzing their own relationships and expectations – both within the family and romantic relationships. They also talked about sexuality, sex, sex before and within marriage, students own gender identities, caste and class in relationships, arranged marriages, economics of marriage – how resources are shared within the family and many others.

“Some of the students seemed genuinely shaken up, these are all very new things for them and not something that’s commonly discussed in rural India,” said one of the trainers.

“I was aware of all these things we spoke about, especially the unequal treatment of women and other genders in society, but the main thing I realized from this course was that all this while I wasn’t doing anything about it, I now have the clarity that I myself can and must make changes, starting from my own home,” said Mallikarjun of Chamrajnagar.