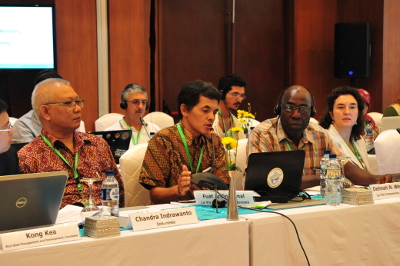 At the global consultation on Farmers’ Rights organized by Government of Indonesia and supported by the Ministry of Norway and the International Treaty on Plant Genetic Resources for Food and Agriculture (ITPGRFA), held in Bali from September 27-30, a delegation representing the global peasant movement La Via Campesina joined the civil society in demanding participation of indigenous people and peasant organisations in all decision-making processes concerning them. It called upon the Treaty to set up a working group on Farmers’ Rights, with adequate representation of peasant organisations and indigenous peoples organisations.

Expressing disappointment at the fact that despite its 15 yearlong existence the treaty has done little to implement farmers’ rights, the delegation of peasants comprising women, men, youth and indigenous people demanded that their recommendations from the Bali Consultation be taken to the next meeting of the Governing Body of ITPGRFA. The recommendations will include a demand to create a permanent process to implement Farmers’ Rights, to work on a process to create national laws and legislations to implement Farmers’ Rights and also ways to support the peasant seeds systems in each country, depending on their local cultural, social, political and economic context.

La Via Campesina, the global peasants’ movement, representing over 200 million small holder peasants in 73 countries, also took note of the fact that it was the initiative of the Government of Indonesia and Government of Norway that ensured that peasants of La Via Campesina and the International Platform for Food Sovereignty were made part of this process for the first time. At a similar consultation held in the past, peasants of La Via Campesina were not made part of the consultation process that discussed Farmers’ Rights. Given this background, La Via Campesina appreciates and acknowledges this important contribution that the two Governments have made to the Treaty process.

At the same time, La Via Campesina expressed disappointment at the industry blocking peasants’ demand to reject Intellectual Property Rights and patent laws, during the three-day long consultation.  These laws directly attack the rights of peasants to use, save, exchange and sell their own local varieties of seeds. It called upon the treaty to urge the member countries to stop criminalization of peasants and indigenous communities on the basis of such laws.

It is important to protect the peasant seeds systems against the global free market systems propagated by Seed Companies producing mostly genetically modified seeds. While at the consultation, La Via Campesina ran into a wall during discussions on contamination by genetically modified and patented seeds, it is a terrifying reality that the 3 major seed companies are announcing mergers and strategic collaborations, controlling two-thirds of the global seeds and pesticides markets. This new monster is a new threat for traditional peasant systems and peoples’ food sovereignty.

La Via Campesina is shocked at the announcement made at the end of the Bali meeting by one of the biggest global gene(germplasm) banks of maize and wheat, of the Treaty’s Multi-Lateral System – the CYMMIT. This gene bank signed a partnership agreement with DuPont, the second largest seed company at global level, in order to create new hidden GMOs which will contaminate all its peasants’ seeds in its freezers or fields, thereby allowing privatization of seeds by patents.

In the days leading up to the Governing Body meeting of the Treaty in October 2017, La Via Campesina will strengthen its mobilizations in its member countries and will work locally to strengthen peasant seeds systems and will monitor the progress that the civil society made to the Treaty Secretariat and its Governing Body.

For media queries write to abhilash@viacampesina.org

To see interventions made by Via Campesina at the Treaty Consultation – visit www.twitter.com/via_campesina or visit www.viacampesina.org