Home » No to evictions in Notre-Dame-des-Landes! 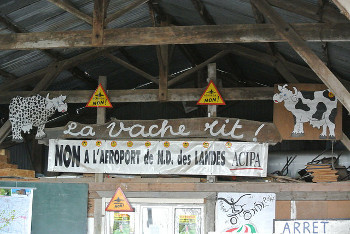 (France, Bagnolet, January 21, 2016) With COP21 still in full swing, political and legal pressure increased on the peasants of Notre-Dame-des-Landes. Four individuals and 11 families who had rejected the expropriation of the farmland are now being sued by AGO-Vinci, the project contractor that cannot start work while these homes are inhabited. They have requested a penalty payment of 200 euros/day per file (there are up to five in some cases), the capture and sequestration of herds and an exception the French law banning residential evictions between 1 November and 31 March. The court hearing was held on Wednesday, 13 December. Deliberations will take place on 25 January – we will keep you informed of the result.

This expulsion procedure (a first!) triggered a strong reaction from inhabitants of the area to be defended (where the airport would be built) and a lot of support in France and elsewhere. An impressive event was held on January 9 in Nantes, involving 20,000 people, more than 1,000 bikes and 450 tractors. A hundred tractors stayed to block the traffic on the Nantes ring road. The only response the activists received was a disproportionate police reaction. Many mobilizations in support of the action took place in France and Europe.

Despite the crackdown, the demonstrations continued, with road blocks throughout the country, very significant mobilizations in several cities in France on the weekend of 16 January and many actions in small groups. Activists are now determined to prevent this airport from being built. We must not allow peasants, old and new, to be evicted – we must fight for farmland!