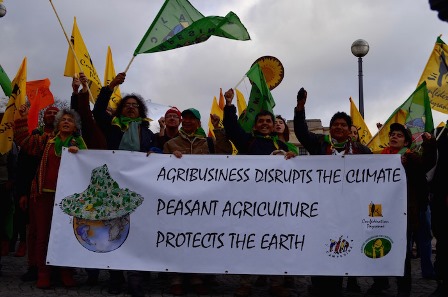 I participated in La Vía Campesina’s international delegation to the United Nations climate meeting (COP21) in Paris, France, from December 5 to 12, 2015.  It was evident that social movement activism is helping us move swiftly and peacefully away from fossil capitalism, with its climate crises, and toward a new social order that prioritizes food and energy sovereignty.

(1) social movements are focused on system change and not on ‘green’ capitalist reform;

(2) the movements are converging and strengthening unity with one another and;

(3) women are widely recognized to be on the frontlines of the system-change struggle, especially indigenous women and women of colour.

Since the 2009 climate meeting in Copenhagen, movements have been calling for ‘system change, not climate change’. ‘Climate science recognizes that we can avert life-threatening global warming only with a fundamental transition beyond the capitalist political economy.[i]

As government delegates negotiated inside Le Borget, Paris, the movements clearly made no demands of government leaders. In the Paris suburb of Montreuil, La Vía Campesina’s Paula Gioia said that “System change will not come from inside Le Bourget. We small-scale farmers, land workers and migrants, indigenous people, rural women and rural youth have to do it ourselves. We do this with peasant agroecology and food sovereignty.”[ii]

For La Via Campesina (LVC), system change entails ecological production under popular democratic control. Small-scale farmer agriculture is essential to averting climate crisis, according to GRAIN, an international non-governmental organization (NGO) and ally of LVC. The industrial food system contributes some fifty percent of total global greenhouse gas emissions.[iii] In contrast, the peasants and small-scale farmers who make up ninety percent of the world’s farmers, produce more food with less fossil energy and waste, with more soil carbon sequestration capacity, and they do so on a quarter of the world’s farmland.[iv]

The importance of social movement activism and the need for global system change are confirmed by  overwhelming focus governments place on corporate market-based solutions which have been demonstrated to fail.[v]  Pat Mooney, long-time NFU member and Right Livelihood Award winner, rejected claims that the Paris agreement was a success:

“I feel like we are being asked to put our children, and in my case, my grandchildren on a bus. The governments are saying that you can trust this bus, they will take your kids home. And yet, the bus has to cross a river, and the river does not have a bridge. The governments are saying … there will be a bridge that will get us across, which will be biomass energy carbon capture and storeage [(BECCS)] technologies that do not exist at this moment.  … But worse than that, the bus that we just put our kids on has no brakes. There are no controls to greenhouse gas emissions, it’s just voluntary. So I cannot think of anything worse.  … What we have is something much worse than Copenhagen … because people believe that governments have achieved something here and they have not. It is much worse than Kyoto purported to be. [Since 1992], we have had twenty-three years of lies and dishonesty, and they have made it into a party.”[vi]

Movements are building links so that the disparate struggles converge into a unified drive to make the transition to a new system.  This convergence acknowledges the need to go beyond solidarity and to act jointly “as one struggle”. La Vía Campesina is playing a crucial role in strengthening the connections among movements fighting for global system change.

La Vía Campesina delegates to the Paris climate talks worked tirelessly to emphazise that “Food Sovereignty – based on peasant agroecology, traditional knowledge, selecting, saving and sharing local adoptive seeds, and control over our lands, biodiversity, waters, and territories – is a true, viable, and just solution to a global climate crisis caused largely by transnational corporations.”[vii] Food sovereignty and agroecology are required if we are going to keep eighty percent of fossil fuels in the ground, as science and justice demand. This central fact makes the timely convergence of food and energy struggles all the more crucial.

In addition to making food and energy connections, LVC also pledged stronger identification with refugee and anti-racist struggles. In defiance of the French government’s ban on protests, on December 9th LVC delegates joined an international solidarity rally against racism, xenophobia and the criminalization of migration which was organized by frontline and indigenous communities from France, USA and Canada. The action was held outside a refugee detention center on the outskirts of Paris in an effort to connect directly with the people inside the center who would hear our voices and our speeches on the loud microphone. I spoke at this rally on behalf of LVC, denouncing theft of peasant land and seeds. I denounced the pollution of water and the climate change that forces farmers to leave their homes to seek safety from conflict and violence.

It was apparent in Paris that movements are acting on a new understanding that the struggle against climate change is intersectional. There is widespread recognition that social and ecological crises are rooted in the same system that puts profits before life; a system of domination and exploitation of nature, including people. This understanding has become a mainstream consensus. Because climate justice is not a single-issue struggle, it is crucial that the growing forces focused on climate disaster connect to what others are doing right across the progressive panorama of movements, and then act collectively.

3. Women on the Frontlines

In Paris it was evident that movement activists of every stripe acknowledged that specific women, especially women from indigenous communities, women of colour and women from the global south, are at the forefront of the struggle for system change. Women of colour are the most exploited and threatened by capitalism, yet they have immense power. This power is rooted in the daily cooperation and the solar commoning political economy within which specific women have profound experience and significant control. Solar commoning — collective control over the means of life, relying on ecological agriculture and solar, not fossil, energy — is a name for the post-fossil-capitalist new society.  Because it now exists in embryo and has ancient roots it can be quickly scaled up and generalized to preserve life itself.

In Paris I heard dozens of women point out that the struggle against climate change is a struggle against all manner of violations of life, especially territory enclosure, extreme extractivism such as fracking, the genetic modification of plants, synthetic biology, the imposition of mega dams and industrial animal production. According to Sophie Huot from Kenya,

“Women know very well that if you destroy Mother Nature then we are all destroyed. And so women are taking charge. We have the solutions because it is women who deal with land, … [and] the water. … Indigenous women, grassroots women … are not relenting”.[viii]

Movements are not seeking ‘green’ capitalist reform but rather the break-up of the racialized, gendered class hierarchy that produces ecocide. These are movements that prioritize the struggles of frontline women.

Paris 2015 brought an unprecedented new moment in social evolution onto the world stage. Movements are making the transition to a post-fossil capitalist epoch, especially within the food system but also in nearly every other sector, and affirming life in all its dimensions.

[v] According to Friends of the Earth International’s assessment of the Paris Agreement which uses four indices provided by the civil society organization People’s Test on Climate: (i) wealthy countries’ current mitigation pledges are not in line with what science requires. The far too weak Intended National Determined Contributions (INDCs) set us on a course of 3 or more degrees Celsius of warming and threats to human survival; (ii) wealthy countries’ international finance pledges do not represent a fair share based on historic responsibility for warming, leaving vulnerable and poorer countries without the technology and finance to make an energy transition; (iii) there are no concrete steps or financing for providing reparations for impacted peoples, and no concrete structures in place for addressing migration due to climate change and; (iv) the agreement does not emphasize solutions that are rooted in actually existing, low-carbon and socially just energy and food systems, and instead leaves the door open to carbon markets in land and soil and other ‘false’ solutions including geoengineering. Available at http://www.foei.org/news/friends-earth-international-assessment-paris-agreement.