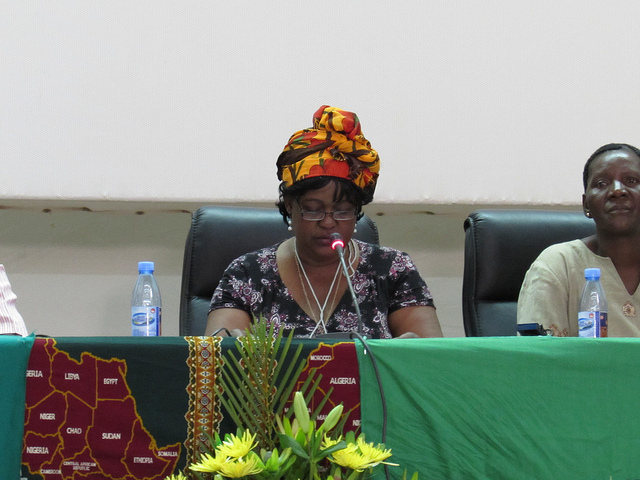 Evidence of the effects of land grabbing in the region, where ProSavana is being implemented, on the peasants particularly women is beginning to show. In Nampula province, women are being prevented from passing in the areas where the foreign companies operate. They cannot access the firewood or gather wild foods. This reality was reported during a discussion panel on “Structural challenges to development of peasant agriculture in Mozambique: peoples’ demands in regard to ProSavana”, at the Second Triangular Conference of the Peoples, held on 24 July 2014, in Maputo.

In this panel, many reports were made on the violation of the access rights to land of women in particular. In rural areas, women are the ones who work the land to provide for their families and fetch firewood to cook.

Ana Paula, a peasant from the peasant movement UNAC based in Nampula, said that in that region women are forbidden to exercise their right to use and exploit the land, which, in itself is a clear violation of the Law of the Land. This Law requires that community be consulted to grant lands to companies, thus giving communities the right to refuse, as in cases where such land granting implies the abuse of their rights.

“We women are suffering from grabbing of the land. As women, we can’t even pass through the lands where the project is based to fetch firewood, or to take roots from the soil to use for medicines for our families. As a result, we are going through really hard times because of these companies that are using the land in Nampula and in other areas” said Ana Paula, peasant and leader of UNAC.

She called on the government to cease the production of soy and other crops for export as they cause health problems due to the use of agro-toxins, as it happened in Brazil in the Cerado brasileiro region. “We ask the government to hear the peasants and not allow the production of crops that bring agro-toxins, for they cause diseases. And I want to call on the governments of Japan and Brazil to stop thinking that we have large portions of available and abandoned land in Mozambique. The Mozambican population is growing and needs this land to produce and to live” said Ana. According to her, the peasants need technical support, an increase in quality of local seeds and access to markets to sell their products at a fair price.

Nilza Chipe of Woman Forum, who was the panel moderator, said that the demands raised in the debate should be considered in the process of dialogue between the government and the civil society.

*- Triangular Conference of the Peoples Communication Team about ProSavana