Home » Let’s talk about the rights of women farmers! 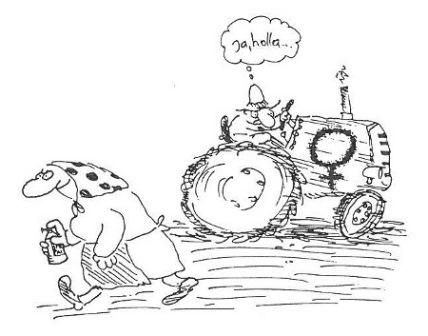 (Vienna, Austria, November 19, 2015) Violence is not always obvious. The traditional structures of power and possession on farms in Austria tend to harm womens’ personal, economic and political rights. Many women suffering from economic dependency and oppression are not aware that they are victims of violence – and that they are able to defend against it. (Economic) Violence against women is still a taboo in the Austrian countryside.

Who owns the farm? Who decides about investments? Who does negotiations? Who has access to money? Who represents the farm? Who engages in political processes? And who does the house and care work?

These are key questions to address the structures of power on a family farm and to reflect on the female participation in economy and politics. Raising awareness for women farmers’ rights is one of the missions of the working group of women farmers of ÖBV-Via Campesina Austria. They got inspired by the work of La Via Campesina’s womens commission and especially by the work of SLG-women in Galicja (Spain), so they started 2009 to discuss the topic of violence against women farmers in 2009. They decided to focus on psychological abuse, economic violence and structural violence rather than on physical abuse. Their main goal was to raise awareness on the rights of women farmers. In order to do this, the women farmers cooperated with different experts on women issues, for example the campaign “16 days against violence against women” (http://www.aoef.at/index.php/16-tage-gegen-gewalt). A whole package of materials on the issue was produced:

The most important output was a 2-minute video-clip with the title “Equal rights on the farm”. It addresses the rights of women regarding the ownership of the farm, decisions about production and money use, access to money, representation of the farm and care work. The video-spot was shown in more than hundred film screenings within the frame of the travelling film festival on politics and agriculture “Hunger.Macht.Profite”, which is co-organised by ÖBV-Via Campesina Austria. Consequently, thousands of people, among them many farmers, in whole of Austria saw the spot.

Furthermore, a whole issue of the ÖBV-magazine was dedicated to the topic of violence against women. The magazine reaches more than thousand households, many of them farm households. In the magazine, women tell about their concrete, painful experiences, but there are also analytic articles and institutions that can support women are presented.

Unfortunately, ÖBV wasn’t yet very successful in convincing teachers to make use of the proposed teaching materials. So the idea came up to go to agricultural schools, in order to talk to young people about rights of women and men on a farm, about different models of partnership/relationship between husband and wife etc. Another approach is to raise awareness of prospective agricultural teachers within their education program. Both projects are still work in progress.