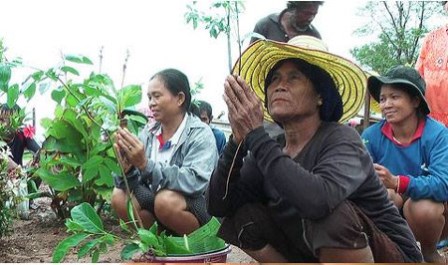 (Bangkok, November 19, 2015) Kao Bart Village is a forest-dwelling community in Dong Yai Forest in Buriram, province near Thai-Cambodia border, Thailand.  Read on to learn about the complex relationship between the state, the military, corporate interests in agriculture, and the determination of women peasants for autonomy and security in Kao Bart Village. This story is contributed by Assembly of the Poor, Thailand.

In 1970, the Kao Bart villagers were encouraged by the Thai army to live and farm in the forest as part of the military’s anti-communist strategies. In 1976, after the war against communism was over, the Thai state decided to push the villagers out from the forest. Their farmlands were been given to corporates for eucalyptus plantation franchises.

In 2009, the franchise of the largest area of their former farmland expired. The Kao Bart villagers decided to retake their land. They became a member of Assembly of the Poor to fight for the rights to land-a critical agrarian resource. As many male members had migrated to town for employment, the majority in Kao Bart community is women. The women then become the main force of the struggle, taking up political struggle on top of household/economic burdens and double farm labor in the absence of their male peers.

The state agencies at the local level were unable to secure the rights to land and could not return the land to villagers. The women of Kao Bart village came to Bangkok to demand their rights. Protesting in the capital city was not easy for the Kao Bart women. They faced threats and harassment from the state officers. Cleverness, calmness and patience become their great weapons. With these qualities, the women dealt with aggressive confrontation and relaxed the tense situations many times over. Even by negotiating with the state, they demonstrated to the world that women could win their rights, in spite of all the social and economic conditions against them. Finally, the government of Mr. Abhisit Vejajiva agreed to solve the problem and allowed the villagers to farm in their former farmland while the solution is in process.

But from first day that the Kao Bart villagers returned to their land, they were threatened and harassed by the authorities from state agencies at local level such as the Forestry officers and National Park officers. The local authorities tried to drive the villagers out of their land, even though the villagers were backed by a Cabinet Resolution allowing them to farm. Despite being afraid, the women decided to continue to occupy the land and struggle to keep farmland for their family and children.

The Kao Bart women face another kind of threat: verbal harassment. The state officers always poke fun at the women, ridicule and insult them. They say, “Women should keep to women’s work in the kitchen, not politics, not struggle!” Some young women were victims of verbal sexual harassment, leading to defamation and slander. Officers would pressure young women’s families to force them to leave the land struggle. “Women’s safety and wellbeing” are used to scare men about the political involvement of their wife, sister, and mother. But Kao Bart villagers still continued to use legal and political mechanisms to demand the state resolution for their problem.

The situation deteriorated sharply when Thailand experienced protracted political crisis that halted the negotiation and the resolution process. It is even more fatal when the military made the coup d’état, announced the martial law, finally installed the military rule in May 2014. A few months later, it issued orders and a master plan on forest preservation that affect millions of small scale farmers living in forest communities. The first victim is Kao Bart village. The military junta is determined to drive the villagers out from their occupied land at any cost. The military increased the pressure upon the villagers, of which the majority is still women. Many villagers’ houses were encircled by the armed forces at night time. Many women were closely followed by the officers. Women felt unsafe. Under the martial law, they could not complain, negotiate and protest. The military junta held the complete authority to unjustly summon anyone, arrest, detain and use the military court for trial. After only 2 months of resistance after the coup, Kao Bart villagers had to leave their land. The military junta did not provide proper support for them after the forced relocation.

Currently (September 2015) the Kao Bart women are in the extreme difficulty. The villagers disperse to many places, trying to survive. There is no security for them at all. Buying or renting farmland is very hard. Thailand’s general economy constantly declines due to the military rule. Prices of rice and other crops drop drastically. Even small scale farmers elsewhere are becoming poorer, needless to say about the Kao Bart women.

Kao Bart women leaders are now working closely with Assembly of the Poor so as to maintain the group and the spirit. Many activities are tried, such as collective rice paddy field,

collective vegetable plots, etc. But it is still very hard. Struggles for land rights and good life for women of Kao Bart is impossible in the military rule. Their future remains dim.

During the occupation of land and the struggle for land rights, before the 2014 coup d’état, the female farmers of Kao Bart actively learned how to do organic farming.

The Kao Bart women performed a traditional ritual, asking the local deity to protect the seedlings they prepared for annual reforestation activity.

The military forced the villagers to leave their land few months after the coup (May 2014), photo taken around June-July 2014 in Kao Bart community.