Home » Land and Ocean Grabs Not the Solution to Climate Change 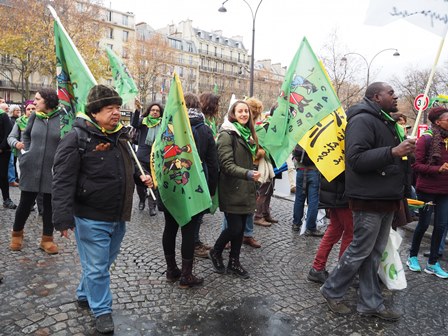 When Hiba Al-Jibeihi stepped off her flight in Paris in early December, it was her first time outside the occupied Palestinian territories where she had lived all of her 24 years. She wasn’t quite sure how she would relate to her fellow international social movement delegates in parallel meetings to the climate negotiations taking place during the 21st Conference of the Parties to the UN Framework Convention on Climate Change (COP21).

The daughter of a sheep breeder and teacher, Hiba works as an advocacy officer for the Union of Agricultural Works Committees, a well-organized group of small-scale farmers in the West Bank, East Jerusalem, and the Gaza Strip. She steadied herself after her first flight and headed to the gritty Parisian suburb of Bagnolet where she would join in powerful solidarity with a group of peasant activists from around the world.

In Bagnolet, amongst a kaleidoscopic mix of hardworking migrants, the international peasant movement La Via Campesina was organizing a process that was the uncompromising opposite of the official climate talks, for which the political elite were camped out in a top-security complex on the other side of town.

La Via Campesina, representing some 250 million peasants transnationally, has taken on issues from land and water grabbing, to trade and migration, to biodiversity and genetic resources in more than two decades of existence as an agrarian movement.

Recognizing the interconnectedness between these pressing agenda items and the climate crisis, La Via Campesina and its member organizations have become increasingly involved in prominent discussions aimed at achieving climate justice. Unlike conventional climate change mitigation strategies, climate justice affirms the disproportional impact of climate change on frontline communities, and promotes their solutions to achieve a just transition.

Of significant concern at the intersection of these issues is a growing global trend ingreen grabbing–land and resource grabs done with a private agenda in the name of protecting the environment. These green grabs have been a centerpiece in the COP process, its 21st session in Paris being no exception.

The international delegation was hosted at the modest compound of Confédération Paysanne, a French peasants’ union that, like Palestine’s Union of Agricultural Works Committees, is one of La Via Campesina’s 164 member organizations. The French group also brought together a national delegation that included farmers from the herding lands of the Alps to the sprawling vineyards of Bordeaux, to the smallholder dairy operations of Normandy.

By the time Hiba met up with the rest of La Via Campesina’s carefully selected international representatives at the Confédération Paysanne headquarters, she quickly made friends with Themba Chauke. A representative of the South African Landless Peoples’ Movement, Themba is well versed in the connections between transnational corporations, the global land rush, and the climate crisis. His own family had been displaced through the expansion of South Africa’s largest game reserve, Kruger National Park, under apartheid.

Themba’s story clicked with Hiba. It reminded her of her own family, who had been displaced from the coastal city of Haifa to the rocky hills of Tulkarm in the West Bank.

“I used to think that our suffering under the Israeli occupation and its theft of our land and natural resources was one of the only causes of displacement,” she said. “Yet after meeting so many other poor people from different parts of the world, I see that they are also suffering because of their own governments’ policies that confiscate their lands and natural resources for the sake of interests with huge companies,” Hiba continued.

REDD+ Redefines Land Theft
La Via Campesina’s real emergence into the world of climate negotiations came on the occasion of COP13, which was held in Bali in 2007. The meetings in Bali were significant because it was there that REDD+ (Reduced Emissions from Deforestation and Forest Degradation) was rolled out, basically turning the forests of the Global South into carbon sinks and supporting industrial tree plantations as a way to mitigate ongoing emissions from polluting countries in the Global North.

By COP13, indigenous and forest peoples’ movements had already been tracking climate negotiations for at least a decade, when peasant movements such as La Via Campesina showed up rather late to the party. But after Bali, if one thing was clear, it was that peasants, indigenous, and forest dwellers’ food-providing networks needed to work together if they were going to have any realistic hope of halting programs like REDD+, which they all denounced as forms of land grabbing.

In essence, REDD+ has served as a prototype for climate mitigation strategies, in which wealthy countries and corporations are able to offset their pollution by purchasing credits elsewhere.

“One of our biggest challenges with REDD+ is that not only corporations, but also some environmental NGOs support it,” said Zainal Arifin Fuad, who is both a leader in the Indonesian peasant movement Serikat Petani Indonesia and the climate collective of La Via Campesina. “So implementing more collective actions across sectoral movements is essential to peoples’ victories,” he concluded decisively.

Zainal practices what he preaches. Some of the biggest victories his movement has seen–at the local, national and international levels–have been won through powerful partnerships between diverse social justice movements, among them peasants, pastoralists, forest dwellers, indigenous peoples, and fishers.

Trading Ocean Rights to Polluters
One of the newest successors to REDD+ that was promoted with much fanfare at COP21 is Blue Carbon. This new carbon sequestration program essentially takes the elements of REDD+ and applies them to marine mangroves and seagrass ecosystems. More specifically, it puts a value on these aquatic resources and injects them into the market for speculation.

For small-scale fishers and others who depend on oceanic livelihoods, the consequences can be disastrous, often leading to displacement. Blue Carbon is just one new ‘green’ phase of alarming trends in ocean grabbing, which has also affected coastal peoples in the form of deep-sea drilling and ports, militarized zones, development for tourism, and destructive industrial fishing practices like trawling.

But Blue Carbon also offered an opportunity to strengthen synergetic alliances between global justice movements. The World Forum of Fisher Peoples (WFFP), an international consortium of artisanal and small-scale fishers, has tightened its ties with La Via Campesina and other sectoral movements of food providers, including forest, indigenous, and pastoral peoples, in large part through the process of the Global Convergence of Land and Water Struggles.

“Cultural and customary rights and appropriate traditional models must be protected,” said Herman Kumara, Special Convener of the Sri Lankan National Fisheries Solidarity Movement, and a leader within WFFP. “That means reprioritizing human rights over corporate rights,” he added.

In partnership with the World Forum of Fish Harvesters and Fish Workers (WFF), representing both fishers and a water-dependent labor constituency that is often overlooked, WFFP released a statement firmly denouncing Blue Carbon as a false solution to climate change. They instead proposed a paradigm shift toward food sovereignty, part of which asserts peoples own rights to define their own traditional food and agricultural systems.

Since approximately half of all greenhouse gas emissions are the result of industrial agriculture, grassroots food providers–whether fishers, farmers, forest dwellers or pastoralists–maintain that food sovereignty is not only a way to protect their rights, but also a real solution to climate change. “If the corporations are getting organized, then it is high time for us to organize the masses,” said Margaret Nakato, the director of Katosi Women Development Trust in Uganda and the current chairperson of WFF.

Calls for Convergence and Climate Justice Intensify
Back at Confédération Paysanne’s compound in Bagnolet, La Via Campesina activists took stock of their activities and alliances just after the official COP21 process closed with the signing of the Paris Agreement. The group expressed its disappointment with the official text and the way it facilitated further resource grabs through carbon trading schemes and other mechanisms.

But La Via Campesina also voiced profound solidarity, convergence, and an absolute determination to continue in struggle. Christian Adams, a small-scale fisher from South Africa, and representative of WFFP’s delegation to Paris had been unofficially adopted by La Via Campesina’s delegation, and participated in the peasant movement’s closing reflections. “The system responsible for fixing the climate is biased towards commercial companies, and oppresses us in such a manner that we’re now being criminalized,” he explained, adding emphatically, “We need system change not climate change!”

When Hiba took the microphone to offer her own closing remarks, she promised to take the lessons learned back with her to Palestine. “You have all given me so much,” she said emotionally, “Because of that, I feel a new accountability to cooperate with the world’s free people to do our best to protect the rights of the world’s poor people.”

The next day as her plane barreled down the runway, Hiba knew what to expect before it hit the turbulent skies.