Women peasants in Mozambique are rescuing an agroecological model that goes against industrial, largescale food production. They are also rising up in protest against land grabbing, a trend that threatens to displace local farmers. In doing this, these women set Mozambique on a path toward sustainable development, while strengthening their positions, defending native seeds and supporting local, healthy food. 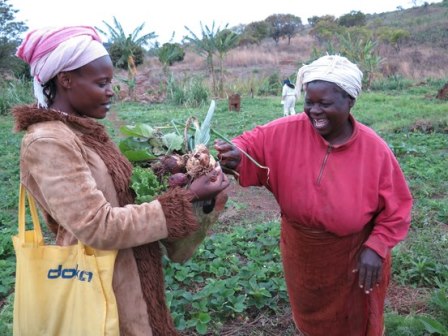 Agroecological methods of farming have always been a part of the social and cultural life in Mozambican rural communities. To strengthen these practices in the face of corporate agriculture, the Mozambican Farmer’s Union, UNAC, has promoted the practices of agroecology, such as the conservation of native seeds and local systems of food production, for a number of years. Women play a key role in many of UNAC’s initiatives.

The village of Namaacha is located in the Maputo Province, bordering Swaziland. In this area most of the food is imported from Swaziland and South Africa. As a result, Namaacha used to be flooded by foreign food products grown with a lot of chemicals.

This changed when women started to organise themselves in local producer organisations. One of these is the Association of Strawberry Producers of Namaacha (APMONA), consisting mostly of widows and their families. When a man dies he leaves behind a great responsibility to his wife to take care of the family, feed the kids, keep the house, send children to school and produce food on the land. The widows of the Association are farming as their main (and in many cases only) economic activity to support the family. They resolved to grow their food in a way that is consistent with agroecological principles.

Their production is based on a model that divides the land into individual and community plots.  From the community plot, a portion of the produce goes to each member and her family, and the rest is channelled to the local market in Namaacha. The benefit of having a collective machamaba (field) is that peasants share knowledge with each other – it’s a space for learning.

With some support from UNAC, the women introduced crop diversification to the region, and started to grow onion, tomato, cabbage, lettuce and carrots. Previously, the women had only been producing strawberries to sell in Maputo. Now, they are producing many different crops using organic fertilizers, composts and biodiversity-based techniques. The main fertilizer is manure from cows and the mulch is hay which is spread to avoid weeds and maintain soil moisture.  Rosa Jorge Obete, co-founder of APMONA, asserts that since she has switched to agroecology, she has saved more money in production, especially since she avoids the costs of chemicals. “It has allowed me to put my children in school and helped me with daily costs. We are now able to manage our expenses. We live well, not like before,” says Obete.

The initiative of APMONA emerged in a context of struggle and resistance. Over the past few years, Mozambique has become a major stage for land grabbing for forest production, tourism development, or agribusiness, the latter being the new trend in Mozambique. The agribusiness model of agriculture produces crops that are usually alien to the local community, such as soy, maize and sugar cane, which are aimed at world markets and other countries’ demands for food, cattle feed and biofuel rather than at the food needs of the local population.  As land in Mozambique is legally owned by the state, concessions are given to foreign companies for 50 years and are renewable for another 50. In Mozambique, agriculture could soon become a corporate-driven sector, with local peasants being dispossessed and displaced, losing their means of livelihood as well as their ancient cultural connection to the land.

UNAC is resisting these trends, finding alternatives to the prevailing system. UNAC women gather regularly in assembly to discuss the challenges they face and strategise for actions to fight back and defend their land and livelihood. Through the Rural Women Assembly, women peasants have been challenging the government and organised protests and marches across Southern Africa demanding accountability from politicians. The Rural Woman Assembly has also been active in collecting, improving and conserving native seeds. These actions have to be seen as resistance to the hegemony of the ‘development discourse’, promoted by initiatives such as the Alliance for Green Revolution in Africa (AGRA) and the New Alliance for Food and Nutrition Security.

With models such as agroecology based on community supported methods of production, peasant agriculture is ultimately more inclusive, sustainable, equitable and stable than any other farming method. This model empowers rural women, guarantees the livelihoods of future generations and ensures food sovereignty at the community and national level. It would, finally, set Mozambique on a path, over the long-run, toward sustainable development, while supporting women producers, defending native seeds, protecting the environment and supporting local, organic food production.

Boaventura Monjane was a communications officer of La Vía Campesina, based at the UNAC office in Maputo until mid 2015. He is currently pursuing a PhD. Email: boa.monjane@gmail.com.