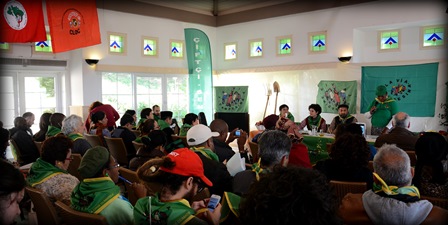 In Turkey, the host organisation is the Federation of Peasants and Farmers Unions (Çiftçi Sendikaları Konfederasyonu), which is working to strengthen the organisational capacity of peasants and farmers so that they can  become part of the global struggle for land and food sovereignty – in opposition to  the neoliberal policies promoted by the large transnational corporations.

La Vía Campesina is the most representative international peasant and small-scale farmer movement. In the past 20 years, its voice has grown and its struggle has expanded to reach all corners of the world. The objectives of its strategies and campaigns include:  full recognition of the role of peasants and small-scale farmers in producing healthy food; the defence of local seeds; access to land for peasants and small-scale farmers. La Via Campesina has worked to influence the development of public policies through its advocacy with national governments and with international institutions, such as the CFS (Committee on World Food Security), the FAO, FIDA and the United Nations Human Rights Council. At the United Nations level, it has made major contributions to initiatives to strengthen defence of the interests of peasants and farmers,  such as the  Declaration on the Rights of Peasants and Other People Working in Rural Areas and the Voluntary Guidelines on the Responsible Governance of Tenure of Land, Fisheries, and Forests.

Among La Via Campesina’s principal founding values are solidarity and internationalism. For this reason, on Feburary 26th, the international delegates to the Midterm Conference in Turkey will visit women and men peasants and small-scale farmers, members of the  Çiftçi Sendikaları Konfederasyonu union in Seferihizar, Izmir, who have been affected by fracking.  Fracking is a geo-engineering technique for extracting shale gas by means of hydraulic fracturation, which has had severe negative effects on human and environmental health, mainly through pollution of the water.

On Route to the  VII Conference of La Vía Campesina

La Via Campesina’s International Conference takes place every four years. It is the main body for collective discussion and decision-making. The International Conference is the space to develop a common mobilisation agenda for the peasant and small-scale farmer movement with the purpose of building an alternative to the current food and farming system. It is the space to promote La Via Campesina’s path – one of respect for the rights of peasants and small-scale farmers, and of opposition to the power of the large transnational corporations.