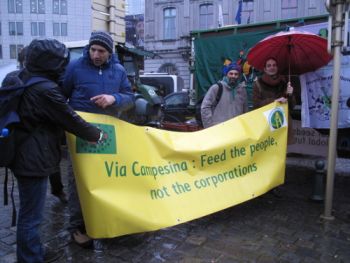 (Switzerland, Geneva, June 27, 2014) La Via Campesina welcomes the resolution approved at the UN Human Rights Council to draw up a binding treaty to punish the crimes of transnational companies (TNC’s). “This is a victory for peasants, who in most cases are unable to access legal systems to take actions against the impunity of TNCs. Also, looking at the current agricultural activities that have been captured by multinational companies, the instrument will be a great tool for the victims to file cases against land-grabbing by TNCs. We thank the initiating countries and the countries that voted in favour.” said Themba Chauke from the South African Landless Peoples Movement, a member of La Via Campesina.

Violence, evictions, intimidation, the criminalisation of struggles as well as assassinations of farmers who are defending their livelihood, their land and their communities have become common practice used by agribusiness, TNCs, local elites and governments. This violence is linked to the privatization of nature, the concentration of land and the increased corporate control of the food chain.

Transnational companies such as Nestlé, Syngenta, Bayer… have been responsible for numerous crimes such as violent land evictions, abuse and contamination of the commons (seeds, water, soil…), the promotion of unhealthy junk food and the increased use of agrotoxins in food production. The industrial food system exploits agricultural and food workers, especially the undocumented workers.

The approval of the resolution is positive progress towards balancing the power and accountability of these companies, and reducing their global impunity. Social movements and NGOs have successfully brought pressure to bear on States to approve the tabled resolution. “The goal of the mobilisation is not only to put pressure on the States to put in place laws to control companies and to safeguard rights, but also to denounce the “architecture of impunity” that protects TNCs operations through aspects such as economic agreements, a long history of structural adjustment imposed by the IMF, and the Free Trade Agreements that are all harmful to human rights,” said Leandro Scalabrin of the Movement of victims of Dams in Brazil.

The work to develop alternative ways of organising our societies in a fair and just manner continues. As a peasant organisation La Via Campesina remains committed to promoting food sovereignty and to continue working in peasant communities to intensify the struggle against corporate impunity.