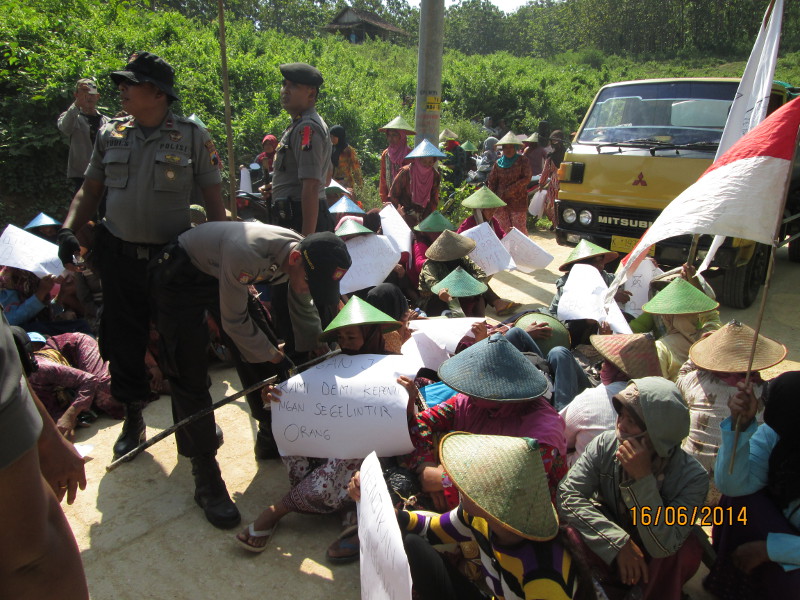 (Indonesia, JAKARTA, June 26, 2014). Indonesia has witnessed scenes of violence against peasants once again. This time it was connected with plans to build a cement factory on agricultural land, and took place on the 16th June 2014 in the Kendeng Mountains near Rembang in Central Java. Police and military officers were brutal in their treatment of hundreds of villagers, mostly women. Some of the women were even thrown out of the way by the officers, who considered them to be disrupting or blocking the access road to a ceremony marking the start of the building of a cement factory by Semen Indonesia, which is planned to occupy 55 hectares of land in the Gunem sub-district of Rembang. This violence was clearly contrary to religious teachings, cultural values and human rights.

These acts of violence also highlight the government’s shortcomings when it comes to implementing development programs, either in regard to the substance of the development, or to the approach it uses with communities. Considering development programs (the substance) first of all, any plans for a cement factory should take into account the function and benefits agrarian resources provide to peasant farmers and local people. Changing the land use from farmland to a quarry means the loss of food sources for people in general and also that the farmers themselves will lose their source of livelihood. The end result is that food sovereignty in the area is affected and farmers will end up moving somewhere else, or changing their profession or just end up as spectators to the roar of the factory as it is built and then starts operation. In the last ten years in Rembang District no less than 14,000 farmers, including 11,000 poor peasant farmers owning fractions of a hectare, have left farming (Farming Census 2013). It is of great concern if this matter is not addressed.

Land use changes also have environmental effects, especially concerning water, which will be used as drinking water and water for agriculture in the area. What’s more, air pollution can have damaging effects on health. Because of this an analysis of the environmental effects should be incorporated as a primary consideration in local and national government regulations, and also in land-use planning. We must not allow these three points to be seen as insignificant, so that they can easily be changed according to the wishes of the market, investors or privileged groups.

Meanwhile if we look at how they approach these problems, we can see how much the government still prioritises the model of intimidation and repression to stifle opinions that don’t agree with development programs, rather than an approach which involves open discussions aimed at finding consensus, communication and listening to the needs of farmers and local communities. The first choice is still development through eviction.

For this reason, to respond to this case of violence, the Indonesian Peasant Union (SPI) states:

How to support this action: There are a few practical reasons for solidarity actions. Firstly, to bring energy to the women taking part in the blockade. Secondly, clear opposition makes it harder for the state to try to split the community, by claiming that some are pro-cement for example. Thirdly, people all over Indonesia are facing similar situations from the government’s growth-focused economic agenda that is heavily reliant on natural resource extraction.

It would be really great if there could also be some solidarity with these women (and their husbands as they look after the children) from overseas. That’s why I’m sending this email out to people who have spent time in Indonesia, as well as a few of you who live here but have contacts abroad you could maybe forward it to, plus a few people from my address book who just have a strong sense of solidarity.

The main thing is some kind of message of support that can be sent back to Rembang – obviously the best thing would be some kind of small demo or action (the company, PT Semen Indonesia (meaning Indonesian Cement) is a state-owned company, which doesn’t leave many obvious targets outside Indonesia apart from embassies, but you could use your imagination for some suitable place to hang a banner etc.) Otherwise maybe just some written message or that thing that people always do on twitter – take a photo of themselves holding a message (if you’re one of those people, you can send it to #saverembang, if you’re social media phobic, send it to me (patlati@poivron.org ) and I’ll pass it on offline!) We can translate messages from your language, especially if they are short. Or use your imagination!!