Home » La Via Campesina struggle against femicide and violence against women 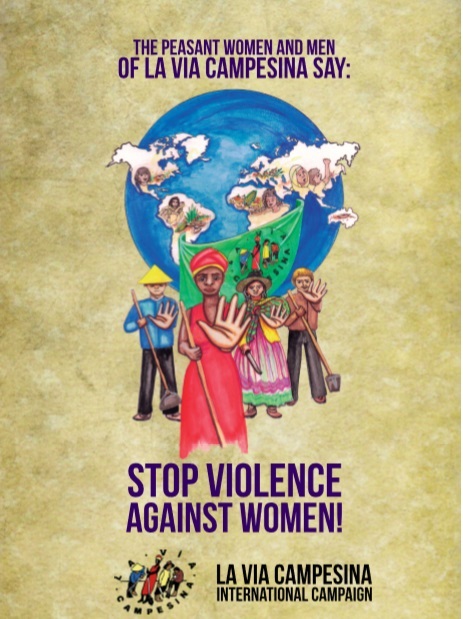 (Harare, November 25, 2015) On the International Day for the Elimination of Violence Against Women on November 25th, La Vía Campesina will be mobilizing to strengthen the struggle and resistance  around our capitalist, patriarchal system. Taking into account how this system endangers the lives of women, how it treats them as objects, how it exploits women and removes them from their homes, creates wars and militarizes civilian territories, it is urgent to build new human relationships that are founded on gender justice and equal rights.

La Vía Campesina is reaffirming its commitment to the “Global Campaign to End Violence Against Women” undertaken in 2008 as a tool for debate and education within the peasant movement. Additionally, it aims to call out the structural violence in society that threatens women around the world. This violence manifests itself in every arena, including the physical, psychological, economic and the political one and it is reinforced daily as if it were something natural and normal.

This year, standing together as La Vía Campesina, we raise our voice in opposition to all forms of violence and oppression while bringing attention to the global increase in femicides. We witness with great indignation and anger how the current historical conditions created by the capitalist, patriarchal system promote social practices that permit attacks on women. This happens both in the city and countryside, regardless of social class, political beliefs, religion and age.

In addition to a patriarchal, capitalist society where violence is normalized and women’s bodies are objectified, the lack of legal protections, breach of laws and lack of public policies worsens the problem. This creates an insecure living situation for women that puts lives at risk and promotes impunity and silence. We are being murdered!

Therefore, on this day of action we call on our organizations and our allies to participate in the World March of Women and ask our friends to collectively make visible all forms of violence and oppression that women face. Our goal is to strengthen our collective efforts as well as our hopes to build a new society based on gender justice and dignity for  everyone.

Photos and audio: Check Out our New Postcard Collection: No More Violence Against Women!

Video:  No More Violence Against Women!