Home » La Vía Campesina: In defense of democracy and the social civil rights in Brazil 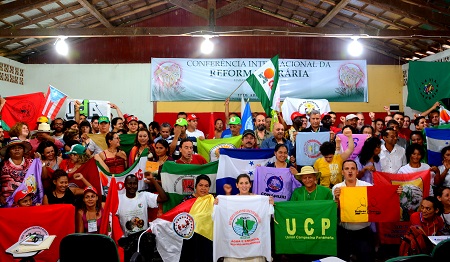 (Marabá, 15 April 2015) The Via Campesina International gathered in Maraba, Para, Brazil for the International Conference on Agrarian Reform, on April 13th through April 17, 2016, with representatives from 28 countries from the 10 regions that compose it, would like to publicly manifest their concern with the current political situation in Brazil. We also repudiate any type of politically-motivated manuveur pro-coup d’etat that puts democracy at risk. We defend the immediate implementation of a Popular Agrarian Reform and the deepening of public policies of social inclusion and income redistribution in Brazil.

The Brazilian ruling class, and the agri-business oppose the redistribution of land and the guarantees for rights of all Brazilian workers. We know that imperialist companies want the privatization of Brazil’s natural resources, for their own lucrative endeavors, denying the social ownership of these resources for the public interest.

We are in solidarity with the people in struggle in Brazil and the Brazilian people because we understand that this attack of the coup hungry Right, is orchestrated as a great imperialist coup in other parts of the world, especially in Latin America.

We repudiate all attempts to cause a political coup and defend the continuation of the mandate of President Dilma Rouseff, acquired legally through democratic elections.