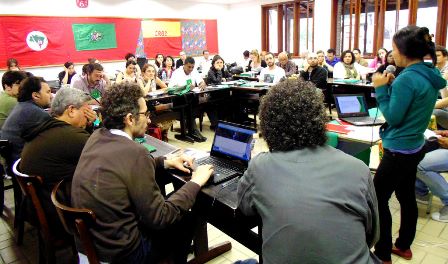 About 60 participants from 18 countries of Africa, Asia, Europe, and the Americas participate in this Via Campesina Conference on Human Rights.

(Sao Paulo, August 19, 2016) La Via Campesina’s Human Rights Conference is taking place at the MST’s National School, Escola Nacional Florestan Fernandes, (ENFF) in Guararema, Sao Paulo.  The conference began on August 18th and will continue until Saturday August 20th, 2016. The main discussion is focused on the current political conjuncture and the criminalization of social movement struggles across the globe.  The event will also examine International Treaties that involve peasant rights and the violation of these by both governments of transnational corporations.

The participants are around 60 activists from 18 countries in Africa, Asia, Europe, and the Americas. They are political leaders from all the continents, people’s lawyers who are linked to the peasant movements of La Via Campesina, allied organizations who during  the three day conference will discuss  and develop action  plans to  unite the existing initiatives undertaken at the national level in various countries to  enable rapid responses and mobilization of international  solidarity to  denounce violations.

During her intervention on the United Nation’s Inter-American Human Rights System, Angélica Castañeda, of FIAN International, comments that it is very difficult for the grassroots organizations to be able to take action in all of the venues of that system due to a variety of bureaucratic barriers even when there are significant emblematic cases. She adds, “The theme of criminalization is symptomatic in Human Rights.  It is fundamental to strengthen the work on criminalization and violence and give it greater visibility”.

In Latin America there are several documented cases of criminalization of peasant movements. Perla Alvarez Britez, of the coordinating committee of the Organization of Peasant and Indigenous Women, (Conamuri) in Paraguay, related the mechanisms of judicial criminalization of leaders who are involved in intense direct confrontations with international corporations and large landowners in their communities. “In Paraguay the most emblematic case is that of the massacre of Curuguaty which is a key point in the expansion of soy plantations.”

This country [Paraguay] has more than 300,000 landless families along with those whose land tenure is not secure, because of the land-market imposed by the World Bank and the neoliberal Cartes government that has prompted a form of counter-agrarian reform mechanism along with the criminalization of those who struggle for land.

The information shared by the participants from the various and diverse countries regarding the violation of rights of peasants all around the world revealed that these actions are systemic.  These violations of rights range from things like the lack of public funding for technical assistance and loans for family farmers and peasants and especially for women farmers as related in the cases in India, to the systematic violence against women that is also present in the Middle East and North Africa.   In addition, there are land disputes and struggles resulting directly from the governments’ approval of laws that privilege and benefit megaprojects that devastate natural resources, such as mining projects.

The victories of working people in place such as Nepal, where they were able to pass a good National Plan for Food Security, have since been severely attacked by those who represent the interests of capital.

The International Treaty that will subject transnational corporations to human rights was also a focus of debate and discussion. 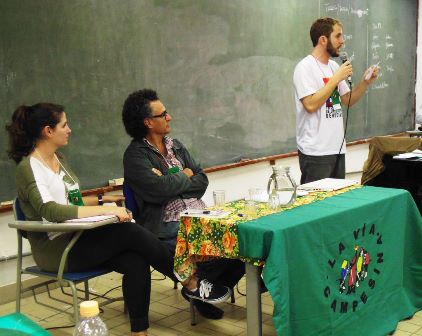 According to Tchenna Maso, a people’s lawyers from the Movement of Dam -Affected People or Movimento dos Atingidos por Barragem (MAB), the treaty needs to regulate the actions of the corporations and impose responsibility on them. The movements must maintain their anti-imperialist character first and foremost because the state, or governmental apparatus, has assumed a position in support of the corporations and this is contrary to its mandate to defend the rights of its people. She affirms that, “It is the role of the state to guarantee Human Rights of its people, thus the government becomes a violator of human rights when it acts in partnership with these corporations. In the eyes of these lawyers it is very difficult to access the legal system because it is restrictive and bureaucratic, and this causes fatigue among national and international forces when dealing with the denunciation and processing of such cases.

In addition, Tchenna spoke about the importance of CLOC –Via Campesina resuming the struggle against the Free Trade Agreements in the Americas by organizing a coordinated Continental campaign like the Campaign in Defense of Democracy and against Neoliberalism slated to take place on November 4th. That struggles is a result of organizing and building unity among many people’s social movements who oppose the neocolonial advances that   attack the integration of the human rights of the people of the continent.

Another document that was presented and discussed at the conference was the Peasant Rights Declaration presented to the UN Human Rights Commission. Diego Montón, of the National Coordination of the National Peasant and Indigenous Movement in Argentina (MNCI) and of the Operational Secretariat of the CLOC- Via Campesina, is accompanying the process that is promoting this Declaration of Peasant Rights at the international level in the United Nations and within Latin America.

Diego asserts, “We are involved in daily struggles in our territories. It seems to me that it is important to discuss the rights of peasants and rural people that are put forward in this declaration to help with the political debate and support the notion that peasants are real and viable actors in the economic, cultural, political, and social realms and that peasants play a fundamental role in the solutions to the structural crises that we face”.

This process began within Via Campesina in 2000, with a debate about the need to put human rights issues violations that attack a people’s sovereignty as well as their cultural plurality and diversity that had not previously been discussed.  The draft Declaration is based upon axes focusing on Agrarian Reform, Food Sovereignty, collective use and community use of land, bio-diversity, seeds, production and marketing at fair prices, equality for peasant women in rural work, as well as the rights that already exist, but that in the rural sphere are diluted or not applied, such as the rights to health and education.

Within the UN Human Rights Council there has been resistance on the part of some of the countries of the North, such as the United States, the European Union.  They based their resistance and questions on three elements: they deny the existence of a peasant identity as a “class” across the globe, they deny the need to speak about any new types of human rights, and they oppose the concept of collective rights.

According to Diego, the struggle to push through the declaration on peasant rights is needed to advance and give visibility to the Via Campesina’s proposal for the peasant class given the current crisis of capitalism, and based in Via Campesina’s alternative view that peasant agriculture can feed all of humanity.  Still to be able to  generate discussion in the UN Human Rights Commission about improving  conditions in rural areas and putting an end to the criminalization of social movements particularly in Africa and Latin America.