Home » “We shall not rest until we’ve freed all our political prisoners”, affirms Via Campesina 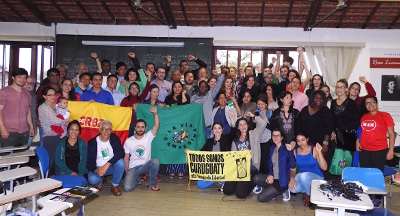 Between 18th and 20th August, La Via Campesina held a Conference on Human Rights at the Florestan Fernandes National School (Guararema, São Paulo) in which people’s lawyers, rural movements and organisations discussed the criminalisation of the worldwide struggle borne by social movements. They brought forth a multitude of proposals aimed at strengthening, expanding and substantiating LVC’s Collective of Human Rights.

In an interview for the MST website, Leandro Scalabrin – a people’s lawyer for the Movement of Peoples Affected by Dams (MAB) – shared some of these proposals and stressed the vitality of implementing these in the prevailing circumstances.

“The meeting went well, we came out feeling very motivated and the Collective strengthened and broadened. We managed to delve into the subject of our International Campaigns in order to implement them in every country and we identified the common challenges posed by the criminalisation of social struggle worldwide. This work will be multiplied across all continents and we’ll build a safety net for human rights advocates. We shall not rest until we’ve freed all our political prisoners.”

Approximately 60 militants from 18 countries in Africa, Asia, Europe and America partook in the conference, who also engaged with the topic of International Treaties, which involves peasants’ rights and examines the relation between TNCs and Human Rights.

In this regard, Scalabrin highlighted that LVC denounces the “architecture of impunity which allows transnational corporations to command the state, approve laws, and create institutions that serve private interests to the detriment of public goods and human rights.” In other words, governments are required to “hold corporations legally accountable for their actions or omissions when they violate human rights in our countries.”

Continue below for the full interview

MST Website: One core theme of the debate was the criminalisation of social movements. What actions were envisaged to uphold LVC’s international coordination?

Leandro Scalabrin: The information brought forth by the participants at the conference confirmed the existence of innumerable peasants that have been detained, ‘disappeared’, forced into exile, met with violence and other criminal acts in all continents. We’re dealing with a wave of criminalisation of peoples and movements who are part of La Via Campesina. There are also political prisons for people who organise the struggle for their rights and are thus treated as criminals.

In light of this, we discussed the necessity of consolidating LVC’s Collective of Human Rights and of establishing an International Human Rights Network through which violations of peasants’ rights would be exposed, and also in order to guarantee that appropriate actions are preceded by broad support and disclosure – in addition to cooperating with already existing networks and organisations working in this area.

Can you provide some examples of this wave of criminalisation?

In Brasil, there are 44 political prisoners, 10 peasants and 34 indigenous people. The National Security Act has already been used against social movements, and now they are using Statute 12.850, which is applied to criminal organisations. This is notably the case of MST in Goiás. Valdir Misnerovics and Luis Batista Borges have both been incarcerated since April and May, based on the law against criminal organisations, for having defended and called for agrarian reform in Brazil.

There are criminalised people in France and Spain too, and the situation in Paraguay, Argentina and Honduras is very delicate, but with recurring characteristics: violence at demonstrations, police brutality, incarceration, legal actions. In Honduras, Berta Cáceres was assassinated, and in Brazil Elton Brum dos Santos was killed by the police with a bullet in his back.

What mechanisms were discussed in order to guarantee that effective actions would be taken in case of violations?

In order to deal with this difficult reality – other than proposing an LVC International Human Rights Network joined by allied organisations in order to establish self-protection mechanisms – legal defence and public denouncement through the international Human Rights systems were emphasised. We name this bundle of actions as the “Alert System”. One of its main objectives is to guarantee the self-protection of those who defend human rights.

LVC works on joint campaigns for the sake of mobilisation and awareness raising in various questions, In the case of political prisoners, what proposals should be brought forth?

The proposal to establish a network within LVC’s Collective of Human Rights, as well as the “Alert System”, represent in themselves steps taken towards mobilisation against political prisons. Furthermore, we shall work on a campaign, building on existing ones, for the sake of liberating the political prisoners. Departing from this initiative, the idea is to shed light on our offensive against the criminalisation of LVC’s social movements.

Another important point of discussion was that of International Treaties. What initiatives can be expected to be taken in order to expand the dissemination of its processes?

We will conduct seminars to announce said proposals and meet with national governments in every country in order to present legal projects, such as in the proposals that appear in the Declaration of Rights of Peasants – Women and Men and the Binding Treaty on Transnational Corporations and Human Rights.

We will demand in each and every nation that respective governments vote in favour of the Declaration of Rights of Peasants – Women and Men, as well as in favour of implementing the Binding Treaty on Transnational Corporations and Human Rights.

LVC was present in the international mobilisation that took place in Geneva in 2014, during the 26th UN Convention on Human Rights when we managed to pass a resolution destined to render TNCs accountable for the human rights violations caused through or because of their activities. It was a close call, as 20 countries voted in favour, 14 against and 13 abstained, including Brazil. The UN recently established an intergovernmental working group tasked with bringing forth the accountability standards.

LVC is present in both instances. What are the main concerns defended by peasants’ movements within these Treaties?

We expose the system of impunity which allows private corporations to command the state, approve laws, and create institutions that serve private interests to the detriment of public goods and human rights. Such processes are entangled with the construction of dams, financing of electoral campaigns, the contamination of our food with toxicants, the corporate appropriation of land and labour.

Governments need to establish legal procedures which hold corporations accountable for their actions or omissions when they violate human rights in our countries. One such example is the Samarco-Vale/BHP incident in Brazil, where more than 200 thousand people fell victim to human rights violations.

How would LVC evaluate the conference and what can be expected when it comes to concretising the Collective of Human Rights in the next period?

The meeting went well, we came out feeling very motivated and the Collective strengthened and broadened. We managed to delve into the subject of our International Campaigns in order to implement them in every country and we identified the common challenges posed by the criminalisation of social struggle worldwide. These efforts will be multiplied across all continents and we’ll build a safety net for our human rights advocates. We shall not rest until we’ve freed all our political prisoners.