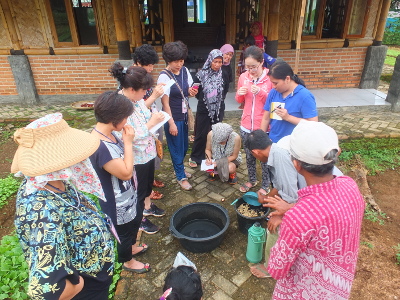 In February 2016, Korean Women Peasant Association (KWPA) and SPI (Indonesian Peasants’ Union), conducted a farmer to farmer interaction and exchange program on agroecology in Indonesia. Held as part of the 2015 regional action plan, 12 delegates from KWPA, comprising of women farmers, scientists and interpreters, joined their Indonesian counterparts and took part in seminars and field trips across Jakarta and Bogor.

Farmer to Farmer exchanges, encouraged actively in La Via Campesina, allows dissemination, exchange and learning about agriculture, food sovereignty, agrarian reform between farmers. At La Via Campesina, we believe that agroecology is a way of life. It is the language of Nature, that we learn as her children and not a mere set of technologies or production practices.  It cannot be implemented the same way in all territories.  Rather it is based on principles, while having broad similarities across diverse territories, can and are practiced in many different ways, with each sector contributing with their own local reality and culture that respects Mother Earth and our common, shared values.

The seminar, held as part of the program, was also attended by allies of SPI, such as farmer organisations, students and agroecology based NGOs. Representatives of KWPA and SPI explained about how they practise agroecology in their respective spaces. 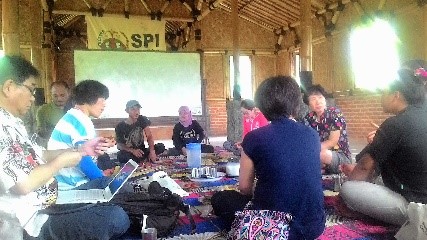 KWPA shared about the seed struggle in Korea amid efforts of the Government of Korea to promote company seed (terminator seeds). Members of KWPA also elaborated on ‘Sister Gardens’ that strive to achieve food sovereignty through agroecology and by promoting native seeds and bio pesticides. ‘Sister Gardens’ aim to change the food system that is oriented towards profit and instead work to protect the ecosystem, and the revival of circulation function of nature and society. Members of SPI shared about involvement of the union in public policy, in land distribution, in promoting seed sovereignty and agroecology.

Members of KWPA also visited two agroecological fields in Bogor run by farming families; by Mr. Jaya and Mr Pandi in Babkan village and that of Mr. Awang in Karehkel village – where they grow vegetables, papaya and so forth. The group also visited a Training Centre run by SPI in Cijujung, where peasants receive training in making compost, bio fertilisers and bio pesticides.