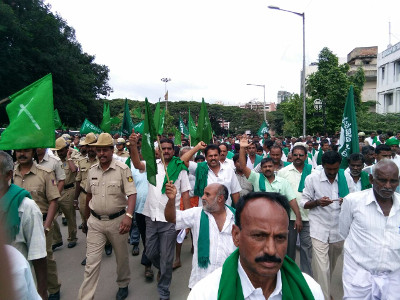 Coconut farmers in the State of Karnataka, took to the streets to protest against massive fall in coconut prices, which they allege is due to cheap imports from Indonesia, Philippines and Malaysia.

While speaking to The Hindu, KRRS president K.S. Puttannaiah told reporters that although the State government had announced in its budget that a policy for Coconut would be framed, it was yet to be materialised. He wants the State government to set up a revolving fund and extend assistance and incentive to growers.

The price of coconuts that until recently cost anywhere between Rs. 25 and Rs. 33 in the wholesale markets has crashed to below Rs. 10 this season. It was a decade ago, in 2006, that coconut prices had fallen below Rs. 10.

With rates plummeting to Rs. 6,500 from Rs.18,000 per thousand coconuts in the wholesale market in Tumakuru, one of the major coconut growing areas in the state, farmers are in deep distress.

Farmer Marimuthu of Gollarahalli in Chikkanyakanahalli taluk told The Hindu that the situation was so dire that his son, who had completed SSLC, had to drop out of education. “He is working as an agricultural labourer,” he said. Many farmers are unable to get back even the amount invested in the farms over the past one year. Paramashivaiah of Dodda Agrahara in Sira taluk said: “I have stopped watering my 200 coconut trees as it is of no use.”

Add to the low prices, what is burdening the farmers more is the traditional practice of “sodi”, where farmers are forced to give 100 coconuts extra at the mandi for every 1000 coconuts, said B.S. Devaraj, state secretary of Karnataka Rajya Raitha Sangha (KRRS).

This article is an abridged version of two reports by The Hindu on 24th June and 12th June.