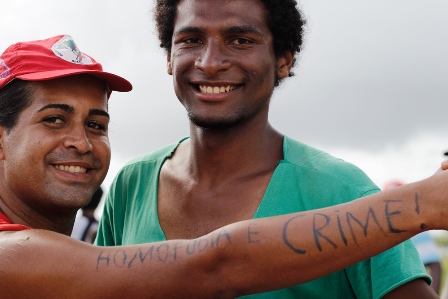 Self-determined and in the countryside*

The global peasant movement La Via Campesina is slowly beginning to open up to the subject of gender diversity. By Paula Gioia, member of the coordinating committee of ECVC

Food Sovereignty is also connected to gender relations – and to respecting different ways of life and the rights of LGBTTQI*. The movement of landless peasants in Brazil is showing this and providing important inspirations for debates in Europe.

Since its founding in 1993, La Via Campesina has promoted Food Sovereignty and a change of the capitalist and patriarchal power relations that are dominating our world today. La Via Campesina is an international movement of peasants, land workers and landless people, fisher folk, pastoralists and migrant workers. It has about 200 million members, organized in more than 160 organizations in 73 countries. In Via Campesina, feminist approaches to Food Sovereignty have played an important role in our peasant movement from the start, to counteract discrimination and all forms of violence against women in rural areas. The participation of women in leading positions has been central to all Via Campesina organizing and campaigning, with all committees made up of 50% men and 50% women. But only after more than 20 years a debate on sexual and gender diversity is slowly beginning.

The visibility and recognition of the rights of lesbian, gay, bisexual, transgender, trans*sexual, intersexual and queer identifying persons (LGBTTQI*) within Via Campesina

have found little consideration in our debates so far. As a movement that is the global leader in the political project of Food Sovereignty and fighting against social exclusion based on the principles of collective living and mutual respect, we must commit to widening this framework to include the rights of LGBTTQI* peasants and food producers.

Within the international context of LVC, incorporating the rights of peasants and food producers that identify at LGBTTQI* is still being sensitively explored and developed. However on localized and regional levels there are grassroots movements who are members of LVC that are already engaging with and incorporating the rights of LGBTTQI* peasants and food producers into their organizations. One example is the Brazilian movement of landless workers (Movimento dos Trabalhadores Rurais Sem Terra – MST), whose experiences can serve as important reference points to the debates arising currently in the European context of Via Campesina.

Not always visible – but long since present

In August 2015 in Guararema in the state of São Paulo, a country wide seminar was held to to explore ‘MST and sexual diversity’. This seminar was a widely organized event building on an an initial informal round table discussion between Brazilian LGBT landless (1) around this issue. At this first official meeting in Guararema, 40 members of the movement, who identify as LGBT, gathered for a mutual exchange. According to one participant, since there was no joint strategy in MST around LGBT rights in the beginning stages of the movement, to devote attention to the situation of LGBT and to recognize their rights is a sign of the maturation MST.

Dê, from the MST Youth and education collective in the state of Mato Grosso, who defines herself as “Trans*woman, landless and activist for the land reform”, explains how hard it is to talk about diversity within the movement and believes that no basis-oriented land reform can be discussed, “without involving those who may implement it”(2).

For the participants, the meeting represented an important opportunity to show that gender diversity very much present in rural areas – a lot more than is sometimes seen. As pointed out by Kelli Malford of MST’s national coordination it is essential that MST “recognizes that LGBT actors are long since present from the social base, across the political activists and up to the political leadership of the movement.”

The meeting takes a concrete position against “conservative forces that reinforce racism, homophobia, machismo and any kind of prejudices”. Acting against this and therefore working towards justice and self-determination is an important aspect to achieving Food Sovereignty and complies with the positions that Via Campesina has been supporting since 1996. The declaration of Nyéléni of 2007, where several civil society actors define their understanding of Food Sovereignty, also recognizes minorities within the food system, promoting their participation in decision-making bodies and recognizing and appreciating our social diversity as a human value. In the past ten years there has been a big increase in peasants and food producers who identify as LGBTTQI* feeling comfortable and safe to express this. Honry Sobrinho of the national secretary of MST points out that the movement must reflect and represent all identities of its members, stating “our political agenda has experienced a lot of visibility and acceptance inside and outside the movement, through the development of self organized structures.”(3) Within the MST the discussions around gender diversity and representation were initiated amongst the active youth membership of MST, which is made up of peasants/food producers whose gender identities include LGBTTQI*. The initiative of this meeting to make a space to address gender diversity and representation within the movement has paved the way for many others to come out with their gender identity within the MST.

Headwind from the Right in the national congress

Nonetheless, the current economy in Brazil is not favourable. The MST has denounced long ago that reactionary forces within the Brazilian Right tried to promote a coup against Dilma Rousseff’s democratic elected government. On August 31st, Brazilian elites ran the coup in the parliament, faced as a legal impeachment. The politics of those reactionary groups are also directed against minorities in rural areas.

The Brazilian Right is currently lead also by an evangelic group in the national congress, whose political agenda refers directly to the restriction of rights of women and the LGBTTQI* community, and whose members fuel sexist and homophobic attitudes. So on the one hand, the self organization of the queer community in Brazil is advancing tremendously, but at the same time, one can observe in other parts of society, that the rejection towards its representatives is increasing.

LGBT actors within the Brazilian landless movement react to this by intensifying the debate. They continue to make an effort for the recognition of a concept of Food Sovereignty that includes the subject of gender diversity. To slow down the advance of industrial agriculture in Brazil and to reintroduce agricultural models that are based on environmentally friendly peasant agroecological approaches and traditional knowledge and make more just social conditions possible, it is important to integrate new actors in rural areas and stop the rural exodus.

To achieve this, the concept of the rural family has to be reconsidered as well. Cristiane, a participant of the meeting in Guararema, explains: „It is time, that the traditional family becomes familiar with the idea that there are other models of small families. There is still a lot to do within and outside the movement. The legislation regarding diverse family forms in rural areas is still not clear.“

For example, often the responsible departments are not yet prepared to issue documents on land ownership for married homosexual couples. In the state of São Paulo, women have the first right of entering her name in the land register. If the case concerns a married lesbian couple, completely subjective criteria have been applied so far. „Our goal is not to create separate individual spaces with certain labels, but to dismantle barriers and achieve a broader acceptance for gender diversity“, says Christiane.

Eduardo from the MST coordination of Ceará state in the northeast of Brazil was the first to succeed in having himself entered in the land register together with his husband. For him, the debate about sexual diversity is closely linked to conflicts around capitalism and class struggle. However, he points out the fact that there would also be resistance against an opening to LGBT topics even within the MST.

Thus, the disbelief that the peasant base would not be ready for such debates would be sustained. For him, such concerns reflect „orthodox leftist attitudes from the 1980’s“, that are saturated in the belief that „sexual diversity is an expression of bourgeois deviation“. The movement isolates itself with such positions; those should not have a space within the movement. „We finally have to wave the rainbow flag and understand rural areas as territory of diversity.” The seminar in Guararema, Eduardo thinks, has contributed „to have this debate within the group of the oppressed, understanding that the peasant and working subject has its own dynamics and realities“.

LGBT actors have long since been active in different aspects of the movement, from the base up to the coordination bodies of the MST. At the meeting in Guararema it was therefore decided not to establish a separate LGBT group for the moment, but to introduce and incorporate the topic within the organization’s already planned activities, promote debates and conduct cultural interventions. This is already being implemented at various levels.

More colour(s) for the peasant movement

Even if the topic LGBTTQI* has been treated very cautiously in the international context of Via Campesina so far, the experiences described here already serve as an inspiration for the LGBTTQI* actors within the European Via Campesina movement. Tackling this missing debate in Europe, the members of the European Coordination Via Campesina have exchanged experiences around the topic in a round table in March 2016. It soon became clear that exclusion and humiliation constitute a reality for LGBTTQI* in rural areas of Europe as well.

Here, the social structures are still patriarchal and not gender equal. This is a strong reality especially in rural areas, which can be seen for example in the expectations towards fulfilling gender specific roles in the career choice of young people. In Germany, it was imperative until recently that home economies are for girls and arbolist is for boys.

Until today, the division of labour according to gender is the general practice in Europe’s agriculture. Even within the peasant movement, women’s participation is impeded, since they are still responsible for the care of farm and family while the men step in the public. Furthermore, rural areas in Europe are still shaped a lot by Christianity and are oftentimes little open towards sexual and gender identities apart from the heteronormative binary gender norms, such as towards models of cohabitation that are different from the traditional small family.

Because of this, many decide to move to big cities. A continent, that has lost big parcels of its peasant agriculture in the past 50 years and faces an urgent need for strategies in order to strengthen rural and peasant structures, cannot afford young people leaving the countryside because of their sexual identities.

Especially in Europe, it is important to make rural areas more attractive to young people, that do not come from peasant backgrounds. This also includes dismantling rejection and hostility towards sexual diversity. LGBTTQI* representatives within Via Campesina Europe can learn a lot from the experiences of the MST and face the challenge to adapt the strategies to the European context.

In rural areas of Brazil, as well as in Europe, it has become clear that the political project of Food Sovereignty can be substantially enriched if gender diversity and the recognition and rights of LGBTTQI* peasants and food producers are Incorporated and represented. It expands the peasant fight against dominating power relations of a capitalist and patriarchal model with a further dimension; and it makes movements like La Via Campesina much more colourful.

1 Instead of LGBTTQI*, here the self-description LGBT by the MST is used, since no one within the organization has so far positioned themselves as inter* or queer*

2 All following unmarked quotes originate from reports on the MST-website (www.mst.org.br).
3 Interview with Honry Sobrinho in July 2016