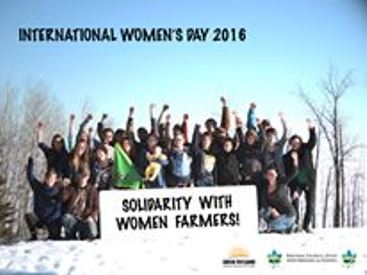 (Canada, March 8, 2016) On this International Women’s Day, 2016, we the youth of the National Farmers Union (NFU) and Union Paysanne stand in solidarity with all of the women farmers, peasants and Indigenous women around the world who are sowing the seeds for change, which includes undertaking a disproportionate amount of the work in feeding communities everywhere. We recognize and honour the efforts of women within the NFU and Union Paysanne who have taken on a leadership role in fighting for equality within the Canadian food system, and who continue to play a strong role in building food sovereignty in this country.

Women farmers in Canada have played a significant part in the forging of alliances with peasant women internationally, through their work with La Vía Campesina. This has been an inspiring process of movement building and knowledge sharing. Women are shaking the structures of power within the patriarchal economic system that is capitalism. We recognize that women around the world are continually putting their lives on the line through this struggle.

We collectively mourn the loss of Berta Caceres, Indigenous environmental leader from Honduras, and we condemn her recent murder, which is a manifestation of the attack on struggles for land, justice, and freedom throughout the global south. Here in the territory known as Canada, we stand in solidarity with Indigenous communities who are demanding justice for the families of missing and murdered Indigenous women, and who are dealing with the ongoing consequences of colonialism.