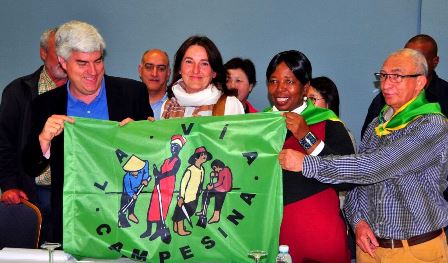 (June 13th, 2016)  On June 10th, La Via Campesina, together with members of the Political Coordination Committee, held a public event in Derio to mark the beginning of the process leading to the 7th International Conference, which will be held in the Basque country in July 2017. The International Conferences take place every four years. They constitute La Via Campesina’s highest collective decision-making body and its most important space for debate and discussion and for developing a mobilisation agenda for the peasant and farmer movement.

La Vía Campesina has constructed a global and politicised peasant and farmer identity that is connected to the land and to the building of Food Sovereignty, through the provision of healthy, agroecologically-produced food for the population. It is opposed to the neoliberal agribusiness model and to the large multinational corporations as well as to the support that they receive from governments. Its member organisations represent the sectors that have been most affected by the globalisation of food production: small and medium farmers, farmworkers, the landless, rural women, indigenous peoples. La Via Campesina has brought together organisations from all over the world, effacing the division between the global North and South. At the present time, it is comprised of 9 regions with member organisations in Africa, Asia, Europe, Asia, and the Americas.

“We have created a political heritage based on a common vision, which has helped us to understand the world and the future, and which has allowed us to develop a capacity for mobilisation that is both local and global. We realise that all over the world women and men peasants and small-scale farmers have the same problems and that they need to be united in facing them”, said Marina Dos Santos, a member of the International Coordinating Committee.

In little more than twenty years, La Vía Campesina has become one of the world’s largest social movements and perhaps the most representative movement in the history of agriculture. Today, La Vía Campesina is present in 73 countries; it thas 164 member organisations with a total membership of more than 200 million people, who have joined together to change the world.

Vídeo 7th International Conference of La Vía Campesina “If we sow solidarity, we will harvest strength”

This videoclip and song have been produced to accompany the activities that will be taking place in conjunction with La Via Campesina’s 7th International Conference.  The words were written by the writer Joseba Sarrionaindia and the singers are from the group “En tol Sarmiento” with the participation of Ines Osinaga (Gose).