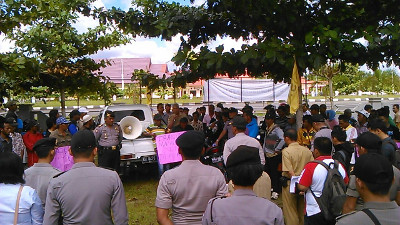 Hundreds of peasant members of the Indonesian Peasants Union (SPI) Katingan, Central Kalimantan, took part in an action demanding immediate resolution of the land dispute at Transmigration Settlement Unit (UPT) of Bali Village, District Malan Island. The action is centered in the Office of Social, Manpower and Transmigration (Dinsosnakertrans) Katingan.

Enjang Richard from Indonesian Peasants Union (SPI), explained that in 2011, Dinsosnakertrans of Katingan  distributed 450 hectares of land  to 450 transmigration families (households). However, the handover process triggered the dispute and conflict because the agency didn’t accompany the process of land distribution at that time.

“The problem is further complicated when at the same time, in 2011, Dinsosnakertrans (also) gave the same land to the Intan Permai Ltd, which now claims the land. They claim the ownership of 360 hectares and only 90 hectares are allowed to be managed by transmigration families,” said Enjang Richard.

“Obviously we have asked for clarity about 450 hectares that have been set by the government as a land allotment of transmigration families. We, transmigrations families of UPT Pulau Malau, also demand security guarantees in the form of legal certificates,” Enjang continued.