Home » International Conference on Land and Seeds: Peasants of Mozambique United in Struggle in Defense of Land and Peasant Agriculture 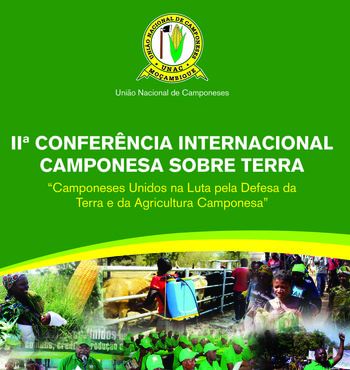 (See the moments of the Conference in pictures…)

Maputo, October 14, 2013 – The National Union of Peasants (União Nacional de Camponeses , UNAC), a member group of La Via Campesina, organized through unions and zonal nuclei, districts, and provinces throughout the county, holds the Second International Conference on Land, in Maputo on October 15 and 16, 2013.

It is expected that more than 200 people representing Mozambique, Angola, South Africa, Zimbabwe, Brazil, Sweden, and Switzerland will participate in this Second Conference, among them more than 130 peasant members and leaders of the peasant movement, men, women and youth from associations, cooperatives, district and provincial unions and peasant communities from more than 120 districts from all provinces of the country.

With the goal of deepening the democratic public debate about the key structural challenges of the performance of the agricultural sector, the urgency of agrarian reform based on the facilitation and promotion of the means of production and productivity in the country, and the urgent need to halt the phenomenon of land grabbing, the Second International Peasant Conference on Land is a result of a wider process of organization, mobilization, engagement and activism of peasants throughout the country which resulted in the completion of three Regional Conferences on Land and Seed between August and October 2013. It is also part of a broader process of strengthening of the peasant movement, mobilization, participation and collective construction of demands of peasant farmers from Mozambique to be incorporated into the National Plan for the Support of Peasant Agriculture, an initiative of agrarian policy proposed by peasants.

According to the leadership of UNAC, “the peasant struggle in defense of Land and Peasant Agriculture to ensure food sovereignty and adequate food, waged by UNAC for the past 25 years, has never been so vital and necessary as that risked by millions of Mozambicans. The perverse effect of the wave of foreign direct investment (FDI) in the form of so-called megaprojects, the commodification of land, the great rush of corporations and programs (ProSavana, New Alliance for Food and Nutritional Security of the G8) of agribusiness (Chikweti), mining (Vale, Rio Tinto, Jindal Africa), and hydrocarbons (Anadarko, Statoil, ENI) for the occupation, expansion, and concentration of land and the growing and dangerous trends that advocate changing the legal framework of land, including a constitutional amendment to allow creation of a general market for the lease, sale, and privatization of land, represent a national emergency.”

The National Plan to Support Peasant Agriculture is a proposal for an agrarian policy of peasants, members of UNAC and those joined together by UNAC, to be submitted to the Government of Mozambique. This Plan aims to respond to the demands of peasant families on the production of native seeds that are resistant to climate change; public services such as agricultural extension programs based on the value of knowledge, culture, and experience of peasants; utilization of the potential of irrigation, construction and rehabilitation of infrastructure connected with the creation of productive capacity, the definition and adoption of effective models for facilitating agricultural credit, thereby ensuring food sovereignty and food suitable for the people of Mozambique.

The Second International Peasant Conference on Land was preceded by processes of Political Education and Training in Organic Techniques and Conservation of Native Seeds, along with Regional Unity Meetings of Peasants held in the cities of Lichinga in the Northern Region, Marracuene in the South Region and in Chimoio in the Central Region of Mozambique. In the three regional events, peasants, leaders and members of the movement (men, women and youth), representing the 11 provinces of the country and more than 120 districts were mobilized and engaged. The three Regional Conferences–North, Central and South– on Land and Seeds were organized by UNAC in a process to prepare and organize with the broadest possible spirit of activism and mobilization of peasants looking forward to the realization of the Second International Peasant Conference on Land.

The Second International Peasant Conference on Land is a space for the coming together of Unions and Provincial Nuclei of peasants from throughout the country, brought together in and by the National Farmers Union (UNAC), during which there will be an interaction with representatives of the Government and all stakeholders involved in the management of land in Mozambique. It is expected that the opening speech will be delivered by His Excellency, President of the Republic of Mozambique, Armando Guebuza, and that Agriculture Minister José Pacheco will be a speaker at the event.

The Second International Peasant Conference on Land is open to a variety of public, private, governmental, and non-governmental organizations and social movements. The conference reflects a set of demands, realities, contexts and specific aspects of the three regions of the country, especially taking into account the associations, cooperatives, peasant communities and families facing the advance of large corporations on their lands and territories in order to build an increasingly integrated approach to effectively resist and defend the rights and priorities of sovereign and sustainable development for families and rural communities.

Note that this conference is also a time when the United Nations Food and Agriculture Organization (FAO) has formalized a cooperation agreement with La Via Campesina, recognizing the essential role of small-scale food producers in the world, including UNAC, coinciding with the celebration of the Day of Rural Women and World Food Sovereignty Day, respectively on October 15 and 16.

As Peasants United We Will Always Win!