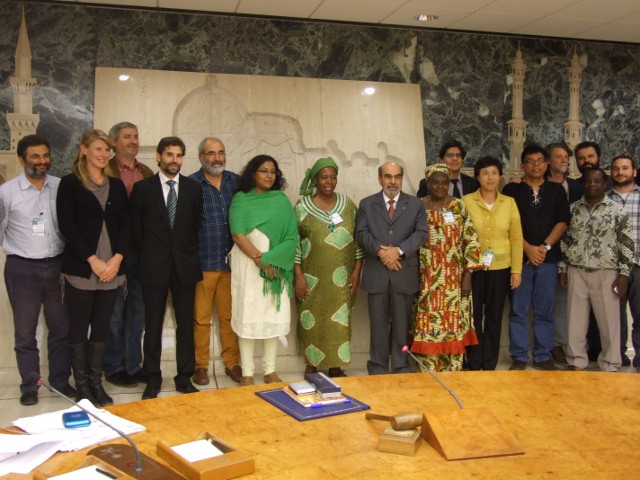 “Reforms at the level of international institutions like the CFS must be seized to advance the cause of peasants and family farmers. In truth no policy whether at the national or international level truly takes into consideration the interests of this group, so its up to us to say what we need”- Ibrahim Coulibaly, president of the National Confederation of Peasant Organisations (CNOP) of Mali

There is some excitement in La Via Campesina about recent developments at the Food and Agriculture Organization of the United Nations (FAO). On Oct 4, 2013 the Director General of FAO, José Graziano da Silva formalized the relationship between the two organizations through an agreement on collaboration, recognizing La Via Campesina as the most important voice of small food producers worldwide. This is yet another welcome step in a series of ongoing reforms of the FAO, which have created a unique and unprecedented space to collaborate with civil society and democratize the arena of global food policy. La Via Campesina has diligently engaged with these reforms to promote food sovereignty.

These reforms are aimed at giving the FAO not just more political legitimacy by becoming more inclusive, but also at reviving it as the cornerstone for international cooperation in the area of food security, starting to take such policy decisions out of the hands of the World Bank (WB) or the World Trade Organization (WTO.) While these developments are welcome, the global peasants’ movement remains realistic about the amount of energy that should be put into the UN, maintaining its greatest strength on the ground mobilizing farmers and building alternatives.

A significant institution that was also reformed during the FAO reform process was the Committee on World Food Security (CFS). It is a separate intergovernmental body, today it is the key space on food and agriculture in the UN system. Its decisions are implemented by the FAO as well as other UN food institutions like the International Fund for Agricultural Development (IFAD), World Food Program (WFP) and the Consultative Group on International Agricultural Research (CGIAR). Initially formed in 1974, over time, this space was neglected and had no impact on global agriculture governance which states considered to rest more in the hands of other institutions like the WB and WTO. Civil society and farmers have always opposed this control of food policies by financial and trade organizations which in their eyes have no legitimacy to talk about hunger.

First, because these represent the interests of agribusiness and trade rather than small farmers or the undernourished. In fact the global food crisis of 2008, which left millions hungry, was mainly the result of hoarding and speculation characteristic of a free market food system controlled by agribusiness. It was a food price crisis, rather than the result of an actual lack of food. The crisis brought the issue of food and agriculture to the forefront of the international political agenda creating another strong push for the reform of the CFS. Second, these institutions are undemocratic. They are controlled by the wealthy OECD countries like the US, UK, Australia among others. Civil society has no say here. These reasons made it even more important to bring food out of their control and into a space where people and governments could actually collaborate to end hunger, not profit out of it.

Intense negotiations in 2009 with strong pressure from civil society and support of some progressive governments, finally reorganized the CFS to become the key acknowledged intergovernmental space in the UN system giving . In this new CFS structure, civil society now has a formally-recognized role that allows it to participate with an equal status as governments in meetings and governmental negotiations. Although it is not allowed to vote, it has the power to influence debates, and hold governments accountable to their commitments. To get the best technical expertise, CFS also established a a High Level Panel of Experts(HLPE). A body of not just experts and academics but also people with empirical knowledge like farmers themselves to make reports on various issues to provide background information and analysis. The CFS recognizes the autonomy of civil society, which can choose its own representatives and also its own mechanism for organizing its participation. It organizes under the Civil Society Mechanism (CSM) which has 41 members in the coordinating committee from different constituencies, including 4 for farmers groups.

The CFS is growing in importance. There has been diligent participation by governments at recent sessions and the presence of NGOs and private sector has also increased. But it has not been all easy for social movements to get their way here. Its important to note that among the actors that are recognized by the CFS are private foundations, corporations, large NGOs, WB and WTO, which is why it is all the more important for small farmers to occupy this space and promote progressive policies for food sovereignty.

Last year, at the 39th session of the CFS, the G20 also approached the CFS to adopt its position on price volatility. For the record, the civil society delegation did walk out of the plenary session when this price volatility position was adopted by a compromised CFS. The G20s position stood in contrast to civil societies demands for strong regulation of the commodity futures markets which were seen as contributing to price volatility and the food insecurity of the poorest countries.

There have been some partial victories too. In May 2012, the CFS adopted the Voluntary Guidelines on the Responsible Governance of Tenure of Lands, Fisheries and Forests, this was evidence that the CFS is capable of bringing to a conclusion a successful consultation among states through a process that is also open to civil society. La Via Campesina regrets that the document is lacking certain points, for example it is non binding, it can’t penalize states. Large land acquisitions are only regulated rather than banned. But this text still gives some power to people to oppose the trend of grabbing of resources using human rights as a fundamental principle. It is a progressive text which includes principles like prior informed consent, recourse to justice, transparency, respect of human dignity, gender equality, recognition of customary rights, tenure systems for communal land use, as well as legitimate occupation rights that are not yet legally protected. It ends the monopoly of the WB on the definition of land related policies, a significant achievement. This was a landmark moment, because the CFS actually rejected the World Banks’ Principles for Responsible Agricultural Investment (PRAI), that it had tried to propose as the foundation for policies around land. This is a political framework in which neither the WB nor the IMF have been able to impose their views.

Currently, the CFS is meeting for its 40th session in Rome from October 7-11 to discuss key issues like agricultural investment. LVC is present and is challenging the beneficial narrative of large scale investments that instead legitimize land grabs and and push farmers off the land to promote export oriented projects like agrofuels. Such trends increase hunger and food insecurity. Instead La Via Campesina argues that policies to strengthen food production should mainly support investments by small-scale food producers themselves. Elizabeth Mpofu, general coordinator of LVC says “agricultural investments of small farmers should be recognized as the key contribution for food production to eradicate hunger.”

Although such reforms to include civil society are welcome, there have been discussions in the movement about the amount of energy that should be put into such institutional politics versus focusing on mobilizations, confrontational positioning and building up alternatives. La Via Campesina has engaged in this process from the beginning, both inside the negotiation rooms, and outside doing actions, retaining its true character of a social movement. The movement considers it important to occupy such spaces, bringing citizens power into the realm of institutional politics and interacting with governments in a more pragmatic manner to promote its goals. However, it is also aware of the limitations of such politics, given the limited impact that can be made, and the immense resources that are required to be part of such spaces, both human and technical as well as financial which are difficult for a social movement to bear. Neither are La Via Campesina’s members used to such technocratic settings. Although they recognize its importance, they highlight the need to strike a balance between this work and commitments back in their countries. Angel Strappazon, La Via Campesina leader from Argentina narrates that, “being here is a sacrifice for our communities and organizations…it is a sacrifice but also a responsibility. Its a difficult but happy task as we hope that thanks to our energy and our lives we will manage to change the minds of our governments and of people”

So while the CFS represents an opportunity to civil society, La Via Campesina finds that it will need to take more concrete decisions in order to gain political credibility in the eyes of the social movements. And while the institutional work continues, farmers mobilizations to defend their rights and the building of alternatives on the field remain the main strategy of the international peasant’s movement.

FAO will cooperate with La Via Campesina, the largest movement of small-scale food producers in the world: http://www.fao.org/news/story/en/item/201824/icode/