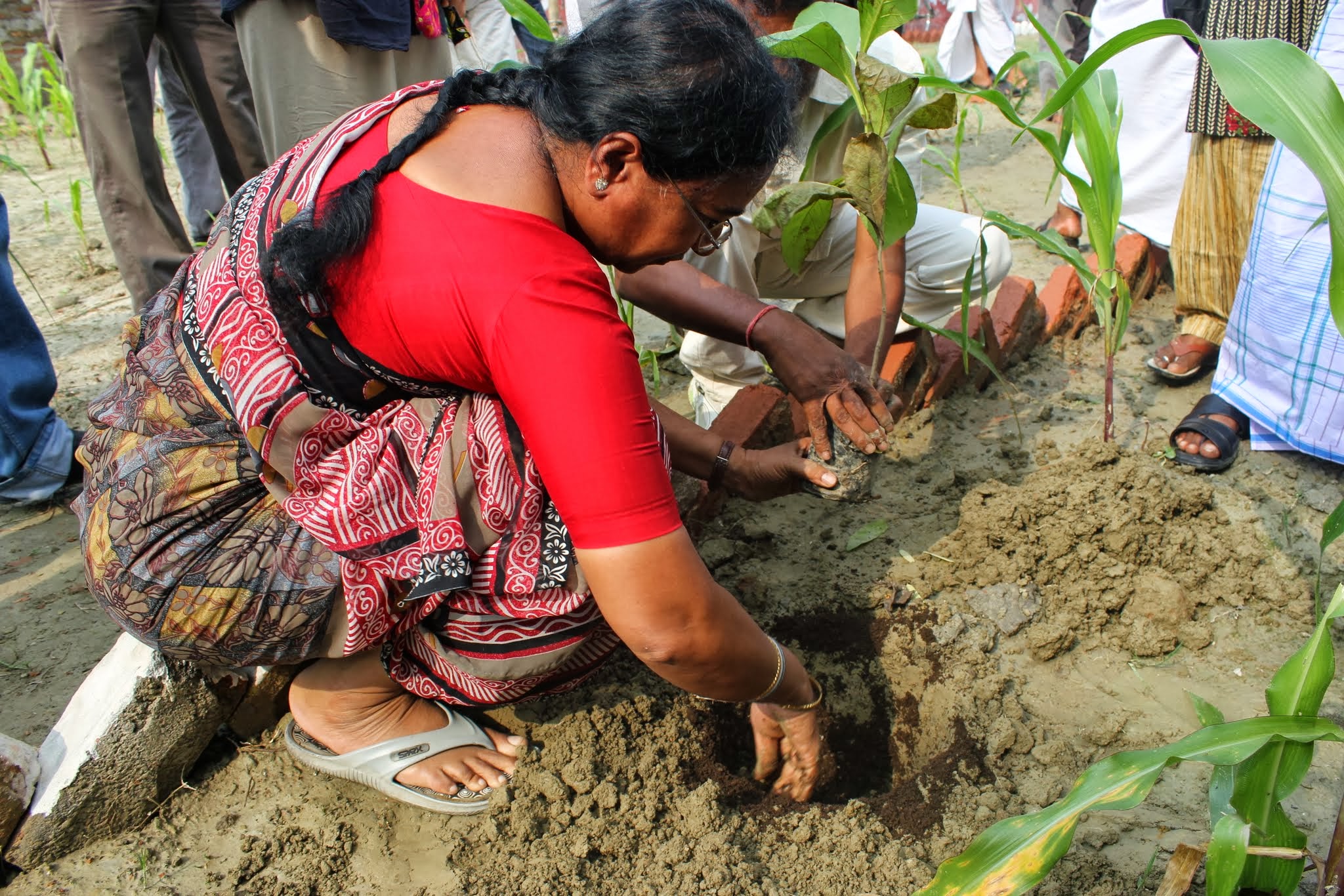 Earlier this year, when Sumant Kumar and his 4 friends, all young farmers from the Nalanda region in Bihar, made headlines for breaking the world records in rice and potato production without using any chemicals, herbicides or GM seeds, it inspired farmers across the world. Through the global network of peasants’ movements called La Via Campesina, farmers in the state of Karnataka in southern India got a call from Brazilian farmers, asking if they could go see this unbelievable feat together.

The Brazilian farmers from the Landless Peoples’ Movement (MST) represented one of the largest organic rice production cooperatives in the world, but hadn’t come close to the 22.4 tons/ha yield obtained by Kumar, which defeated even the Chinese world record holder and “father of rice,” Y Longping.

Together, La Via Campesina and local activists of the GM Free Bihar movement members of ASHAorganized a “see and learn” field visit for farmers from south India and South America – namely Karnataka, Brazil and Haiti.

It’s important to note that this happened against the backdrop of a string of high profile reports from across the world that have rejected industrial farming and GMOs as the solution to global hunger. The latest one by UNCTAD this September, with contributions from more than 60 international experts claimed that “monoculture and industrial farming methods are not providing sufficient affordable food where it is needed, while causing mounting and unsustainable environmental damage

Alternatives are not coming from agroindustry, they are coming from peasants themselves — agroecological farmers like Kumar and millions of others across the world. These farmers are practicing a type of farming that makes agricultural families self-reliant on their own inputs, creativity and local knowledge , rather than on high loans for unsustainable corporate technologies .

Take for instance “seedman” Mr JP Singh, a brilliant and innovative farmer from the holy city of Varanasi. He has single-handedly conserved more than 460 local varieties of rice, 40 of red gram and 120 of wheat on his farm. Some of his indigenous high-yielding varieties perform even better than those developed by companies and public universities and the government has commercially released them for the benefit of farmers.  During our visit, he shared with us:

“I want the government to promote farmers’ seeds. Farmers can save them, reuse them and distribute them. The company hybrids are expensive and we have to buy them every time. There is no need to do this if we shift to farmers’ varieties. 1 million farmers buy seeds directly from me from all over the country and I am personally in touch with each one of them,” while displaying JP 85, JP 11, JP Balwan, his own seed varieties.

“This wheat is very high in protein, this dark rice has higher quantities of iron, this one can grow without water, this one grows in just 100 days, this one cures diabetes,” he narrated to the group of inspired farmers. He has received accolades from presidents and prime ministers alike and points out that such recognition from society for a humble farmer like him is what gives him momentum. But the biggest proof of his success are the farmers lining up at his house who have traveled from the far corners of India to buy his seeds. 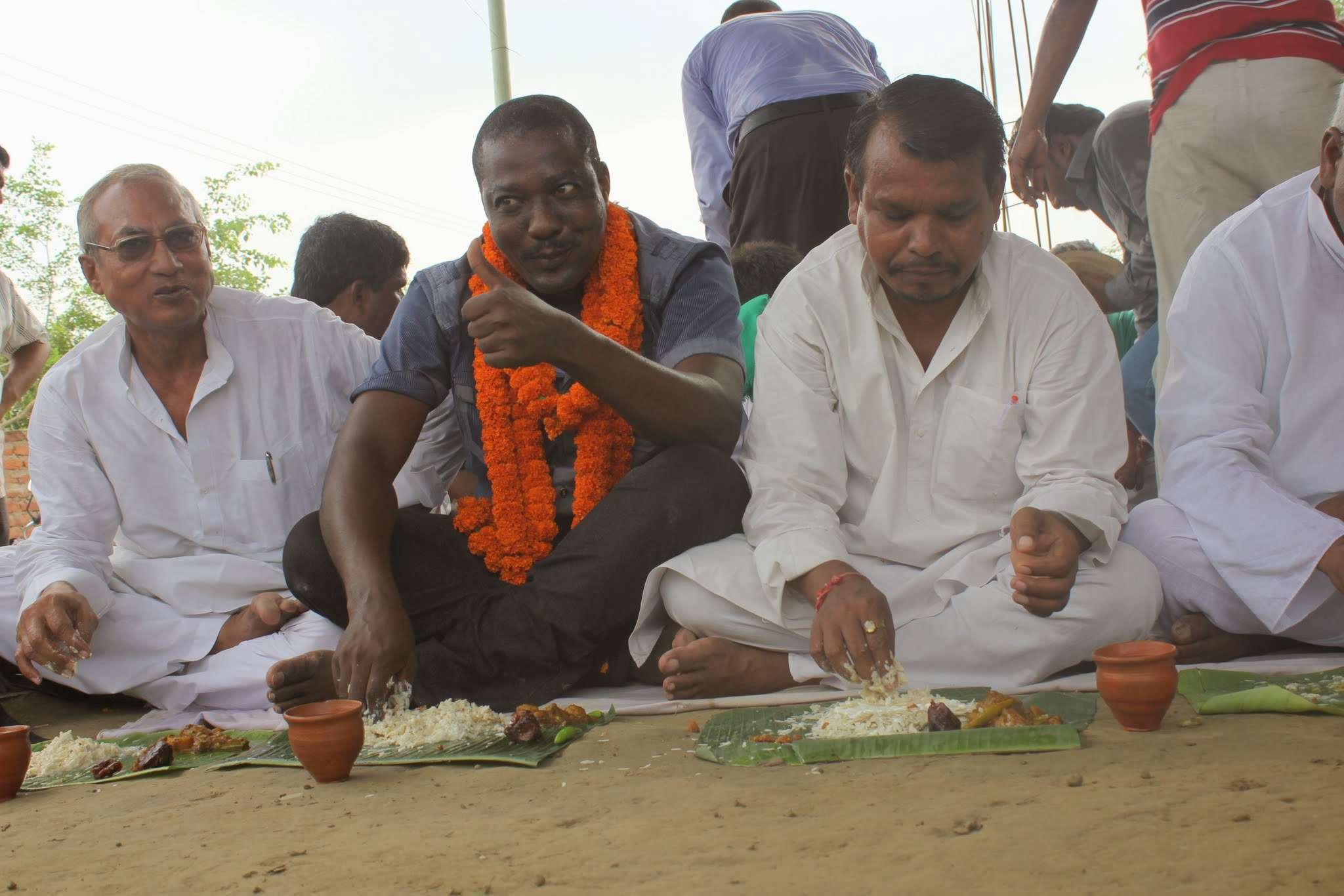 “I canvas nearby villages on foot and give farmers the seeds. I ask them to distribute them to 5 other farmers at least, and like this we try to spread our native seeds.”  JP Singh’s sons help him, proudly telling us that they rejected corporate jobs by the agroindustry after finishing their degrees in agriculture; instead, they want to help their community and continue the legacy of their father as farmer scientists in the village. “We will build a seed museum soon and try to train as many others as possible,” says Mohit, JP’s son.

JP is an experienced soul, but young farmers are not far behind. The record-breaking group of 5 Nalanda farmers in Bihar said they shifted to organic farming after receiving training and support on SRI from the Bihar states local agricultural department. System of Rice Intensification (SRI), is a relatively new agroecological technique which uses lesser water and seeds than the traditional methods but helps yield far greater quantities. The Bihar government had introduced SRI to their district in 2008 and almost 90% of the farmers there now practice this method. The yeilds for paddy obtained by the farmers are 22 tons/ha by Krishna Kumar, Nitish Kumar, Ramanand Singh and Sanjay Kumar had yields of 19.6 tons, 19.2 tons and 19 tons per hectare respectively. Nitish Kumar’s 72.9 tonnes/ha in potato was later broken by another organic farmer, Rakesh Kumar who obtained 108.8 tons/ha.

The farmers combined SRI with classic organic practices of mulching, crop rotation, green manures, cow dung, poultry manure, vermicompost, among other things. Some also used organic fertilizer that was distributed for free by the State Agriculture Department. One major source of controversy was that some record-holders used Bayer and Syngenta seeds, giving rise to the doubt that it was corporate seeds alone that achieved the feat. This myth was soon debunked as other farmers in the area that used the same seeds, combined with urea and other fertilizer applications, and still got a lower yield than the Kumars.  The community has started a shift to local seed varieites now, and are receiving similar yields, without the Bayer or the Syngenta seeds. Many even used JP varieties, produced by our new friend JP Singh of Varanasi. The economy of the entire area has changed and farmers claim their incomes have increased ever since they shifted to organic farming.

Manoj Kumar, a progressive farmer from the Muzzafarpur area of Bihar is yet another example of what can be achieved if farmers’ protagonism is encouraged. A natural teacher, he facilitated 350 other families to come together and form a local farmers’ club. Together they have converted the entire village to organic farming. Each household has a large green container of vermicompost outside. “Everyone thought I was crazy at first, but they all saw the success of organic farming on my farm and joined me. Our village is totally self sufficient in food and we produce mainly for feeding our community,” said Manoj. Another woman, Vimla Devi, greeted us. She was the first women to start a vermicompost plant, and played a pivotal role in persuading many women to join their club, a stark contrast to other Bihari rural women who we rarely saw outside their family’s domain.

“Bihar is showing a lot of promise in organic farming and the state is providing good support, we need our governments everywhere to encourage us farmers, because we can really bring a change in our community level if supported to promote agroecology. We dont want to become dependent on the market,” said Nandini Jairam, an activist from the KRRS.

KRRS was proud to host the international guests who had traveled with them to Bihar in a tour in their home state of Karnataka. In addition to farm visits, exchange meetings took place wherein KRRS activists asked the international participants about their techniques at home, and what they learned here. Interestingly, both guests cited cooperatives as central to agroecological success:

“In Brazil, we are producing rice in a cooperative, by collectivizing production, industrialization, and commercialization. It’s the secret to our success,” said Sidinei Pietroski from MST. His companero Joseph added, “We are so grateful for our visit here – I learned information from agroecological farms in India that I never learned in agriculture university! And it is impressive to see farmers sit and talk about their common issues such as yield and discuss innovative methods for solving their problems. In my country, even though we have many cooperatives, I haven’t seen a meeting like this!”