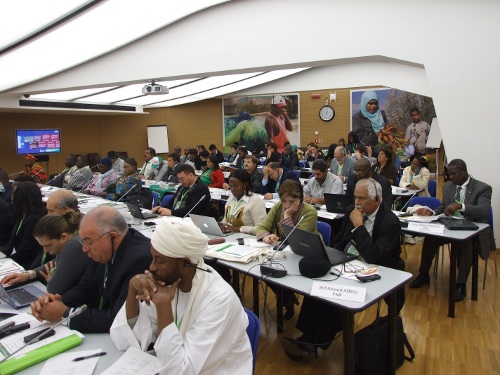 (Rome, 18 February 2014) A large delegation of peasants and farmers from the international farmers’ movement La Via Campesina has met in Rome at the fifth global meeting of the Farmers’ Forum, that was jointly arranged by organizations representing farmers and small-scale fishers and by the IFAD (International Fund for Agricultural Development). We, members of the delegation, call on the governments that are financing IFAD with public money to give a better direction to IFAD’s programs and projects so as to support the peasant and agro-ecological agriculture that constitutes an answer to the food and climate crises. Every day on our family farms, it is we who are the major investors in our agricultural production. We feed the vast majority of the world’s population, and yet 80% of hunger still occurs in rural areas. For these reasons, we ask for a substantial increase in public investment in this area and the implementation of policies that facilitate increased investment by peasants and family farmers themselves.

By participating in the Farmers’ Forum, La Via Campesina also aims at obtaining from IFAD the effective implementation of the decisions taken by all of the governments of the world at the 40th session of the CFS (Committee on World Food Security), including the decision to develop, together with peasants’ and farmers’ organisations, at the national level, a vision and a strategy for investment in the farming sector.

IFAD is a fundamental tool for the investment of public funds to strengthen peasants’ and farmers’ organisations and production worldwide. IFAD investments should focus on arriving at a model of sustainable peasant agriculture that has agro-ecology as its basis, and that takes into account the central role of women and youth in ensuring food security and sovereignty.

“To address the food and climate crisis, our model of peasant production, based on a sustainable and agro-ecological work, is necessary. It is crucial to keep and use our seeds, to have access to the land and to be able to sell our products in local markets. To drive this process, it is essential to strengthen our organisations,” says Elizabeth Mpofu, general coordinator of La Via Campesina. She stresses that “IFAD programs and projects allow moving in that direction, a direction also adopted by the CFS. It is this direction that we must follow and reinforce even more in the future, by working more closely with these institutions.”