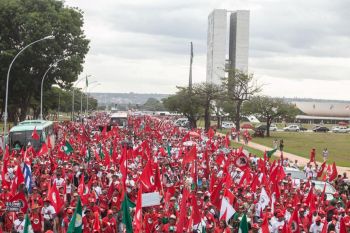 (Brazilia, February 12, 2014) The ministry esplanade was covered in red yesterday afternoon.  Around 16 thousand Landless Workers participating in the 6th MST (Landless Workers’ Movement) National Congress made the 9km journey from the Nílson Nelson gymnasium to the Three Power Plaza and back.

We are here to show that we are not satisfied and we demand immediate Agrarian Reform. Dilma is ignoring the Landless Workers and instead giving money to agribusinesses and Fifa”, affirmed Kelli Marfort, of the MST Gender sector.

The first stop on the protest march was the US Embassy. MST members glued posters to the walls of the embassy demanding freedom for the Cuban prisoners and supporting all those who fought against imperialism.

“The flag of terror is here (USA), sowing hatred throughout the world. It is they who are the true terrorists (US Government)”, affirmed Ênio Bonenberg, an MST leader.

Afterwards, the march continued on to the Supreme Federal Court, where the peaceful protest was met in the same way that the working class in Brazil is normally received: the police fired tear gas and pepper spray into the enormous crowd gathered before the federal institution.

The MST protested against the judicial inaction in trials for crimes committed in the Brazilian countryside and against the high number of killings in recent years in land conflicts.

The protestors also acknowledged the gestures of Joaquim Barbosa, many of whose judgements have led to political decisions in favour of certain economic groups, who enjoy privileges because of his position.

“This kind of behaviour is typical coming from the Supreme Federal Court, because the MST always comes to protest peacefully and in an organized manner, but they create some sort of provocation to delegitimize us. Twenty policemen acted violently in the middle of 15 thousand people to create a political episode and to justify violence against us” said Fábio Tomas, from the MST in São Paulo.

Rafael Lima, a musician who was accompanying the MST members at the protest in Brasilia, said he was disgusted by the police violence: “There is a history of such police treatment against social movements in Brazil. You just have to think back to the mass murders in Eldorado de Carajás and in Curumbiara, for instance.”

While tear gas and pepper spray were fired at the protesters before the Supreme Federal Court, the rest crossed the Three Powers Plaza towards the Palácio do Planalto (Palace of the Plateau) where they were met by police in a similar manner.

To attract Dilma’s attention, the MST march set up a protest camp of black tarpaulins in front of her work place. Enormous banners asked: “Dilma, where is Agrarian Reform?” and asked that she free herself from agribusinesses.

The police used pepper spray, smoke bombs and Tasers against the members of the movement advancing towards the Palace. Fifteen policemen also attacked protesters who were preparing a theatrical intervention.

John Oliveira, from Ribeirão Preto, explained how the confusion began:

“The bus came with the materials for the theatre intervention and we started to unload the crosses. The policemen saw and thought it was something more hostile and surrounded the bus. When we got the crosses they started firing rubber guns. They started to hit us without any reason”.

Asked about the reason for the confusion, João Paulo Rodrigues, of the MST National coordination, explained: “The first reason for the conflict is that Agrarian Reform is not being accomplished. Secondly, we have an underprepared police force, or actually one which is very well prepared to create conflict. The military police are responsible for everything that happened here.

Either they want to test us like guinea-pigs for the world cup protests or they want to generate a conflict to destabilize their governor.”

In total 12 protesters were injured and one activist was arrested. Minister Gilberto Carvalho proposed a meeting with president Dilma for Thursday morning. However, due to the hostile behaviour of the police, the movement’s leaders have not yet decided whether to accept the meeting or not.

The MST has been in Brasilia since the beginning of this week holding its 6th Congress. For the movement’s members it is extremely important to protest in Brasilia at this time.

“We live in a time where the agribusiness in this country does not produce food and only allows us to consume poison. It is important to come to the federal capital to put our demand for the People’s Popular Agrarian Reform on the agenda” said Edemilson Monteiro, a member of MST.

For Rosa Andrade, who accompanied MST passing through the streets of the city, the protest is a way of demonstrating to the population the necessity of Agrarian Reform in Brazil.

“There will be no development in the country without Agrarian Reform, and this movement for Agrarian Reform, in which everyone must participate, is important because everyone depends on the food produced by these men and women to live”.

By Alan Tygel and Márcio Zonta