Home » Building global alliances and convergences for alternatives to capitalism 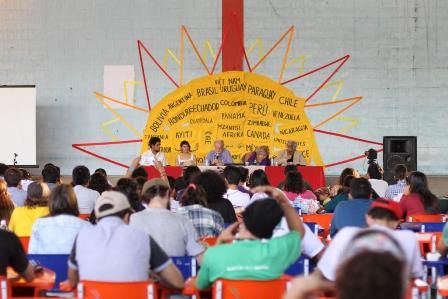 From June 21 to 26, 280 youth from four continents and 115 organizations participated in the International Summit for Struggling Youth (Encuentro Internacional de la Juventude en la Lucha) in Maricá, Brazil. The meeting was convened by three Brazilian organizations — Levante Popular da Juventude/Brazil (Popular Youth Uprising), the Articulation of Social Movements toward ALBA and La Vía Campesina’s Landless Workers’ Movement (MST). A central outcome was a declaration that the youth delegates will take back to their organizations to discuss future involvement to create a global international coordinating body for youth struggles. The proposed coordinating body would facilitate joint actions and solidarity among rural and urban youth and among youth in different parts of the world. This global youth movement may offer the youth of the National Farmers Union an opportunity to contribute to and learn from their counterparts in related movements, including those working on education, housing and access to land.

The youth affirmed themselves as subjects within, not separate from, the global movement for human freedom and the defense of Mother Earth. The youth also underlined the fact that they face a particular set of challenges: lack of access to land, free (quality) education, meaningful work, and health care (including abortion); increasing youth unemployment; political systems that do not represent youth’s needs and values; addictions and the drug economy’s targeting of youth; precarious jobs that lead to precarious lives and; the threat of global warming to the inherent right to a full life, both for younger and unborn generations. More alarming is the criminalization and surveillance of youth activists and their exposure to imprisonment, abuse, torture and even death. For example, on September 26, 2014 in Guerrero, México, 43 students from the Ayotzinapa rural teachers’ college disappeared. Méxican police and military may have been involved.[i] This disappearance led to the formation of Jóvenes ante la Emergencia Nacional (JEN) (Youth Facing the National Emergency).  Members were prominent at the Summit.[ii]

Youth members of La Vía Campesina from Palestine, Morocco, Zimbabwe, Tanzania, Korea, France, USA, Canada, and Brazil attended the summit. These youth shared their experiences of struggle and the strategies they are involved in to build food sovereignty in their territories. Michaelin Kellie, an African woman from La Vía Campesina’s ZIMSOFF (Zimbabwe Smallholder Organic Farmers Forum), called for the declaration to reflect the reality that “we cannot address climate change unless we treat nature and humans as one. What happens to her happens to us, and so the exploitation of Mother Earth is the exploitation of us as human beings and vice versa”. Kellie’s call for an end to all forms of exploitation contrasts sharply with those who seek to expand accumulation with minor ‘green’ adjustments to current relations, including through so-called Climate Smart Agriculture. This is a losing strategy because it entails massive destruction of nature, including human life. More discussion on this point could better centralize transformative ecofeminist activism and analysis, as put forward by Kellie.[iii]

Cultural celebrations abounded. At the opening and closing of each meeting youth organized a mistica — a ceremony or performance meant to build cross-cultural solidarity. Performances of song and dance added joy and facilitated communication across language barriers. Both women and men were seen and heard at the microphones, in musical performances and on the dance floor. Among the many chants was: “no socialism without feminism”.

The gender relations at the event appeared to be horizontal, with both women and men involved in planning and decision making, and with some analysis of the need to end the exploitation of women taken up in the declaration. The youth dedicated time in the discussions and cultural activities to express solidarity with the women of Kobane, Syria who are facing down the Islamic State (IS) and “building of an economic system that is based neither on the exploitation of human labor nor on the pilferage of natural resources.”[iv]

The process of writing the declaration helped lay the groundwork for global solidarity and alliances across movements. In groups of twenty to thirty people, organized by language for ease of communication, youth worked out the content of the declaration. They discussed not only the struggles they face within their territories but also the processes they are involved in to challenge and bring about alternatives to capitalism. The English speaking group, which had representatives from organizations from fifteen countries, highlighted the following processes for transformation: civil disobedience and non-violent direct actions; agroecology; boycotts, divestments, and sanctions; autogéstion (self-organization) and cooperatives; grassroots political structures including assemblies; replacing symbols of repression with popular art and; the use of music and dance for affective education and communication.

Participants in the smaller group discussions synthesized the findings and reported back to the larger assembly. The outcome of this democratic process was the declaration[v] and the proposal for a global day of action which is scheduled for October 8 to mark the anniversary of Che Guevara’s assassination.

Overall the event was tremendously important in that it created new and deepened already existing solidarities and convergences. The transformative potential of this event could be strengthened by including more youth from those Indigenous communities at the forefront of action to keep fossil fuels in the ground. Because fossil fuels power every link of the corporations’ value chains, alliances and joint actions to fight agribusiness and energy extractivism are crucial to effecting a swift and peaceful transition toward a life-affirming global political economy.

Terran Giacomini is an associate member of the National Farmers Union