Home » Honduras: Statement from the CLOC-La Via Campesina Central America in reaction to the increasing criminalisation of the peasant movement 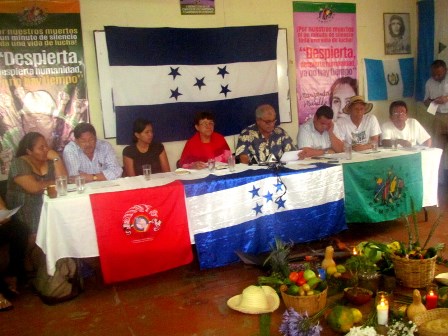 (Tegucigalpa, May 17th, 2016)  Having made a thorough analysis of the social situation in Honduras, particularly with regard to the peasant and indigenous movements, the Political Coordination Committee of the CLOC-La Vía Campesina Central America, composed of representatives from Panama, Costa Rica, Nicaragua, El Salvador, Guatemala, and Honduras, meeting together in Tegucigalpa, issued the following statement:

2.- We are extremely troubled by the repeated violations of the human rights of thousands of peasants, indigenous women and men, and Afro-Hondurans. Problems over land ownership and use have resulted in the criminalisation of more than 5,000 peasant activists, including at least 1,700 women, who have been put on trial because of their activism. Many of them are subjected to systematic persecution, and some 200 women and men peasants have been assassinated.

3.- We were deeply affected by the shocking assassination of our sister and comrade Berta Cáceres, who campaigned for the ancestral rights of indigenous peoples and for the defence of their land and territories, for the rivers, the forests, and all of nature. Our distress was compounded by the assassination, just days later, of COPINH leader Nelson García and by other subsequent incidents.

4.- We are very concerned by the lack of progress in the investigation – let alone in the punishment of those who were guilty – of the assassination, in August 2014, of our comrade Margarita Murillo, a founding member of the National Office of Rural Workers (CNTC).

5.- We deeply deplore the frequent and recurring evictions of peasant groups with the destruction of their crops and their dwellings. These incidents constitute violations of the human right to life as well as of the right to food sovereignty.

6.- Conflicts over land involving peasants and indigenous peoples are a result of the implementation of a neoliberal and extractivist model that concentrates landholding and appropriates natural assets. The price of this model is the institutionalisation of violence.

La Via Campesina Central America, which brings together thousands of peasants, women and youth, indigenous people and Afro-Mesoamericans, is in complete solidarity with Honduran peasant and indigenous organisations. It is for this reason that we are meeting now in Honduras.

We call upon the government of the Republic of Honduras to bring to an end the bloodshed in the Honduran countryside, and we demand due punishment according to the law for all of those persons who plan or commit such crimes. We are also calling for the immediate cancellation of  the DESA mining concession with its lethal effects on indigenous communities.

We urge the Honduran National Congress to pass the proposed Law for Comprehensive Agrarian Reform with Gender Equity for Food Sovereignty and Rural Developmen, and the proposed Law for the Decriminalisation of Peasant Struggle, as well as the Law for Free and Informed Prior Consent (CPLI) for the protection of the territories and resources of the indigenous peoples. We are also urging the Honduran National Congress to declare the Gualcarque River a national protected area and World Heritage Site.

For integration of the peoples of Central America, for food sovereignty, for respect for life, for an end to the criminalisation of Honduran peasants and indigenous people and Afro-Hondurans.