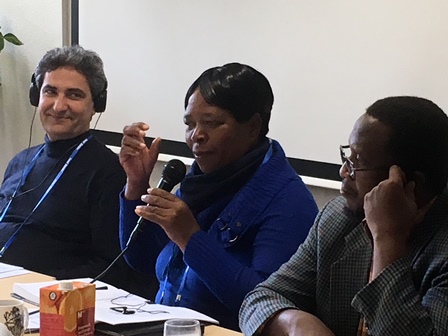 Delegates from La Vía Campesina, representing 200 millions of peasants and small scale farmers, rural women, rural workers have started their two preparatory days in Geneva on the 15th an 16th may, before their participation inside the third Intergovernmental Working Group for a UN Declaration on the Rights of Peasants and other people working in rural areas that will take place on this week inside the Human Rights Council. LVC together with FIAN and CETIM have been working on this issue since 2002 in order to bring inside the international human rights system the recognition of peasants and rural communities as rights holders.

LVC has been joined by representatives  from the Network of Farmers’ and Agricultural Producers’ Organisations of West Africa (ROPPA), the World Forum of Fisher Peoples (WFFP),  International Indian Treaty Council (IITC), World Alliance of Mobile Indigenous Peoples (WAMIP), International Union of Food workers (IUF), International Federation of Rural Adult Catholic Movements (FIMARC), Pain pour le prochain, Brot für die Welt, Coordination Sud, Center for Legal and Social Studies (CELS), International Network of Human Rights (RIDH) on the second day to agree on common grounds that will push for the recognition, institutionalization and accountability of rights of peasants and rural communities to be entitled as human rights inside the draft of the declaration that is going to be discussed on the following days.