Home » Honduras : La Via Campesina as international observer of the electoral process 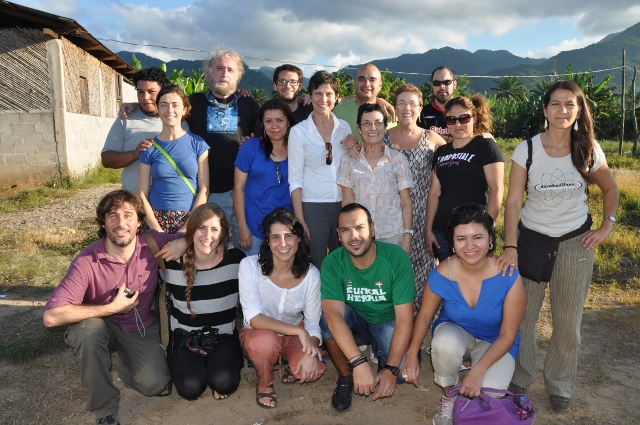 (Tegucigalpa, Honduras, November 25, 2013) La Vía Campesina participated with 60 national and international observers in the Honduran elections which took place the 24th of November 2013, in order to support and sustain the Human and Citizen Rights of the people of Honduras as well as the Honduran Peasants movement.

In this way we sympathize with the civil society in Honduras which, since the Coup d’état in 2009 has suffered an increase of the structural violence with the murder of 113 peasants, the arrest and other restrictive measures of 1460 peasants and the direct violence against female leaders, all because of their social struggle for land.

Despite the efforts to consolidate a large delegation to participate in the observation process, this intension was hampered since the delegation of observers from Vía Campesina El Salvador was intimidated at the border and wasn’t allowed to enter the country, which lead to a decreased international presence in the election centers.

Along with this we want to denounce the murder of Amparo Pineda and Julio Romero, community leaders in the town of Cantarranas, Municipality of San Juan de Flores in the Francisco Morazán department, belonging to the Central Nacional de Trabajadores del Campo – CNTC – one of the member organizations of La Vía Campesina in Honduras. They were brutally murdered by masked men with high caliber weapons, while returning from an election training 12 hours before the elections.

This is not an isolated even but is one more example of the systematic harassment and intimidation against the peasant sector which is going on in the country, performed both by militaryforces, members of private security forces and organized crime,in rural as well as urban communities throughout Honduran territory

Regarding the process of observation of the ballot boxes the international delegation was accredited by the Tribunal Supremo Electoral (TSE) with the intention to verify the transparency of the process.

In the observation process we maintained active presence in approximately 400 Vote Collection Committees (Mesas Electorales Receptoras – MER), where we detected the following irregularities:

At this point we also want to highlight to the irresponsible attitude of major traditional media in publishing data, surveys and other biased comments, both during the campaign and a few hours after the closure of the election polls, and even worse, that without having reliable and definitive data on the total count of the vote.

As delegation of observers of the elections, we want to show our concern about the insufficient attention of the public institutions (Tribunal Supremo Electoral (TSE), the Public Ministry, the National Police) as well as the funding of the political parties and the use of public resources for campaign purposes before the elections.

Our conclusion is that the electoral process has not been transparent enough. On the contrary we consider the elections an “institutional fraud”, which position the country in a very worrying situation.

We are also surprised about the attitude of the European Union and the OAS that despite the many irregularities identified, were quick to support both the (preliminary) results and the process, which according to their Delegation of Observation has passed “normally.”

However, despite of the negative aspects in the recent electoral process, and precisely because it is important to retake a new path forward to advance in the democratization of Honduras and its institutions with a large participation of the people, the International Delegation of Observers of Vía Campesina also find some positive aspects that should strengthen the social and popular movement.

First of all, it is necessary to strengthen the international observation which channel the reports of denunciations and guarantee transparency in these processes. At this point we should also mention that we were well received by the people from the country. Also we celebrate the active participation of women and young people in the electoral process and the possibility of expressing the will and readiness for change.

The need to rebuild food sovereignty in Honduras, a national plan of agrarian reform and the fight against violence against women and communities in struggle, are important concepts that have been around the electoral process itself and to be followed in the present agenda of social movements to strengthen developing country seeking a vision for social change.

The need to achieve food sovereignty in Honduras, to form a plan for agrarian reform and the fight against violence against women and communities in struggle, are important concepts that have been present in the electoral process and which should keep on being present in the agenda of the social movements to strengthen the development of a vision for the country, seeking popular and social change.

Vía Campesina will continue accompanying the electoral processes and strengthen the popular alternatives in all countries, as part of our principle of international solidarity with all peoples of the world.