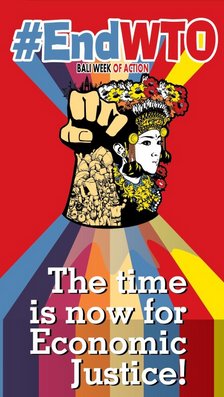 (Bali, 28 November 2013) The international peasants’ movement -La Via Campesina, with over 200 million members in 70 countries, will organize in a massive way from Dec 1-6 2013 at the upcoming World Trade Organization 9th Ministerial meeting in Bali, Indonesia. It will bring in a large delegation of peasants from around the world to Bali in order to demonstrate its opposition to the World Trade Organization (WTO).

The WTO, the emblematic institution of free trade and corporate-led globalization has been trying to push for the expansion of its free trade rules through the Doha Round launched in 2001. After several collapses and stalemates in the negotiations, the WTO has found a way to revive not only itself but also to deepen the free trade liberalization agenda and expand into areas not previously covered by trade. Through the proposed Bali Package, the WTO is bringing life back to the negotiations by making empty promises of development to Least Developed Countries, a terrible deal on Agriculture to developing countries and in return, taking a legally binding agreement on Trade Facilitation. La Via Campesina denounces these efforts to revive the severely de-legitimized organization and calls for an End to the WTO and the free trade regime.

For La Via Campesina, 18 years of the WTO is enough. Small farmers the world over have suffered long enough. The WTO Agreement on Agriculture, for example, has allowed billion dollar subsidies to agribusiness, which has pushed small farmers out of their lands and their livelihoods. This market-oriented approach to agriculture is a serious threat to food sovereignty, public health and livelihoods. Developing countries have been demanding the right to support their small farmers in the interest of food security and public stockholding but the developed countries will not allow it. Instead, the rich countries are offering a palsy “peace clause” in the Bali Package, a temporary measure for developing countries like India, Indonesia and others, to provide support but under highly restrictive conditions.

La Via Campesina calls not only for the rejection of the Bali Package but a rejection of the whole WTO and the free trade regime. Only a grim future awaits on this path of free trade liberalization. Instead, La Via Campesina believes the time is now for Economic Justice, an economy based on equity and restores balance between humanity and nature and has at its heart the principles of food sovereignty.

La Via Campesina is not alone in calling for an End to the WTO. Together with Gerak Lawan (Indonesian Peoples Movement against Neocolonialism and Imperialism) and the Social Movements for an Alternative Asia (SMAA), a newly formed coordination of social movements in Asia, which includes the Migrant Forum in Asia, Jubilee South-APMDD, World March of Women, Korean Confederation of Trade Unions, Alliance of Progressive Labor, Focus on the Global South, water movements, climate justice movements and several others, more than 100 organizations and movements the world over, have signed the call for an End to the WTO.

These movements are also organizing an EndWTO Bali Week of Action to not only demonstrate the growing movement against the neo-liberal regime but also to highlight the proposals for alternatives from the different social movements and communities.

The EndWTO Bali Week of Action has begun with the departure of the Youth Food Movement Caravan from Jakarta last November 25. The Caravan will go through 7 cities in Java and will arrive Bali on December 1. The Week of Action then opens on December 1 with the social movements assembly and the welcome of the Caravan. It is then followed by an Economic Justice Assembly on December 2 which will challenge the mainstream notion that there is no alternative to neo-liberalism, it will highlight concrete alternatives on economic justice through speakers on food, trade, migration, climate and others. A massive and colorful mobilization for economic justice will take place near the Renon Park in Denpasar, Bali, on December 3, bringing together more than 2,000 activists from around the world. A People’s Tribunal will take place on December 4, with eminent judges and lawyers that will carry out a public inquiry into the crimes against humanity and the planet by the free trade regime. Dec 5 and 6 will be the days of a Women’s Assembly and several organizations will organize more than 15 different activities- assemblies, roundtables and panels on different topics.

La Via Campesina and the members of SMAA and Gerak Lawan will also have a number of press conferences inside the official venue of the WTO Ministerial and outside at the Week of Action.

For more information on the Bali week of Action :

1. Information on the schedule of activities inside the WTO Ministerial NGO Centre in Nusa Dua, Bali:

December 3: 6pm-7:30pm: Press Conference: The end of growth and the future of the WTO. Evaluation and proposals

December 4: 3:30pm-6:30pm: The failure of the WTO and alternatives from the People for Economic Justice, Room

December 5: 3:30pm-5pm: The geopolitics of free trade: links between TPP FTA and WTO

December 6: 11:30am-1pm: Press Conference: The post-Bali Roadmap of the People