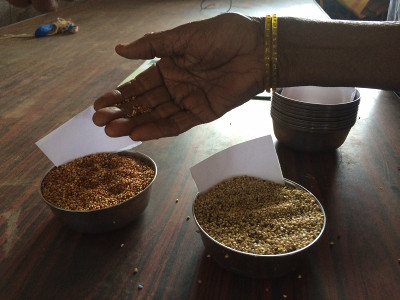 At least 60 farmers, mostly from the neighboring indigenous Soliga community, as well as other small farmers including some urban origin farmers gathered for a farmer-to-farmer training session on millets at the Amrita Bhoomi agroecology center, on 2nd July 2016.

Amrita Bhoomi is linked to the Karnataka State Farmers’ Movement (KRRS for its initials in Kannada language) and is La Via Campesina’s agroecology school in South Asia.

Successful millet growers, both young and old came to share their experiences and answer questions. This was followed by millet seed distribution to the trainees. Grameena Kutumba, a group that promotes millets and organizes direct farmer to consumer markets, co-organized this training session. They committed to follow up with a farmer to consumer fair early next year to allow trainees at this session to directly sell their produce to consumers. 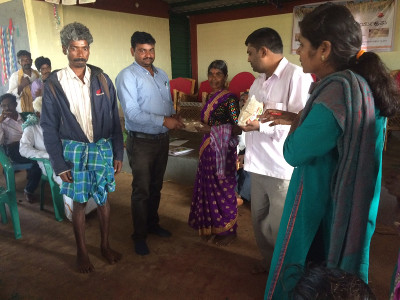 Urban origin farmers sponsored and gifted packets of millet seeds to the Soliga indigenous farmers. Some members of a local bakery also came by to present millet cookies made by them and showcase different forms of value added food products from millets.

There are many types of millets- Finger millet, Pearl millet, Foxtail millet, Barnyard millet, Kodo millet etc- all with varying flavors, textures and culinary adaptations. Millets are hailed as a miracle crop. This favorite food of birds, is also one of the world’s healthiest food for humans. It is a crop that can grow naturally without the need for any irrigation, chemicals or fertilizers. Sadly, millets were wiped out of our diets and farms because of the government’s heavy promotion of rice, wheat, sugarcane and other green revolution crops. Millets can resolve not just ecological problems by ending chemical and water use, they also provide income benefits to farmers by greatly reducing their cost of cultivation.

The nutritional profile of millets is by far superior to that of rice or wheat. Millets are high in protein, calcium, fiber, iron, and most vitamins. They can alleviate hunger and malnutrition; a major crisis in India, by simply including them in people’s diets and partially replacing polished white rice and over-processed wheat as much as possible. They also have a very low glycemic index thus improving insulin response and fighting diabetes. Millets improve heart health, are high in anti-oxidants and improve digestive health.

Millet crop residues are an excellent source of fodder too. India’s serious drought crisis has adversely impacted livestock, which are first to die in times of water and fodder scarcity. Millets can grow in drought and also are very nutritious for animals.

Although millets are still a big part of indigenous peoples diets, their consumption among other rural and urban populations has depleted tremendously after polished white rice took over. These days, there is a growing consciousness and demand for millets from consumers due to its great health impacts, but there is not enough production in Karnataka. This is a major reason behind this training session organized by Amrita Bhoomi- to encourage and spread millets among Karnataka’s farmers. Promoting millets is a key campaign for Amrtia Bhoomi and many other activities and fairs are planned through the rest of the year.

Boregowda, a millet grower from Mandya (a region dominated by sugarcane and rice because of the presence of a dam, which is drying up fast) said,

“It was 40 degrees this year, the hottest summer ever, and we had no water or rain. I decided to try to grow millets, and they grew so well, my fields were green without any watering! My neighbors were impressed. So I went to agriculture university scientists to get their opinion and see what they had to say. But I didn’t tell them that I was already growing millets. I asked them if they had any millet seeds and whether I would be able to grow them during this dry spell. The agricultural scientists told me that nothing would grow in this summer, and even if it were to grow, there would be major pest attacks. They advised me to buy various chemicals to spray to fight pests. I later informed them that in fact my millets were already growing and lush and that I didn’t use any water or chemicals! They were surprised.”

There are also challenges in cultivation – birds love millets! If a single farmer grows millets then she would lose most of her crop to birds. This is the reason why millets need to be grown collectively over a large area so the birds have many farms to pick from and not just one. “Millets teach us to come together,” said Yellapa, a farmer teacher from Dharwad, who is part of a millet grower’s collective. The Soliga indigenous farmers said, “we must also share our crops with the birds, our food is not just for humans.” Soliga farmers were the most enthusiastic participants of the training session as they have traditionally grown millets as subsistence crops.

“There is not even a single millet mill in the entire state of Karnataka! The neighboring Tamil Nadu state government on the other hand has set up processing units in their state. Most of the millets from Karnataka go to Tamil Nadu for processing and then come back here. We have to demand from the Karantaka government that they set up at least two processing plants in the state, one in the north and another in the south of the state. This will really encourage farmers to grow millets.”, said Chukki Nanjundaswamy of Amrita Bhoomi.

Traditionally millets were processed by hand and a very labor-intensive and time-consuming method. This would really increase costs for consumers. On the other hand, small millet processing units do exist but they lead to major waste- upto 30-40% waste. The more efficient larger mills are more expensive, which is why Amrita Bhoomi is demanding that the state pay for them as a support to farmers who can then collectively grow and process millets. 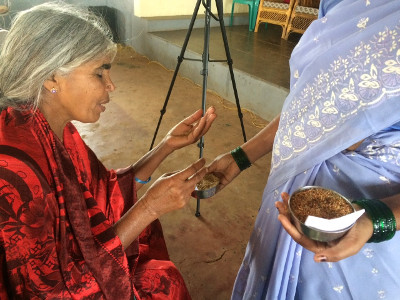 The UN celebrated 2013 as the international year of Quinoa, a wonderful grain given to the world by the Andean people. The participants concluded that the time had come to also celebrate millets internationally, especially in its various centers of diversity in Africa and Asia, as a crop that can eradicate malnutrition, hunger and resolve many ecological problems. They also stressed that millets need policy support  – not just for farmers but also for consumers. The government should include this nutritious food in public programs such as in public school meals plans, and primary health centers instead of just focusing on pharmaceutical vitamin pills or chemically fortified foods.