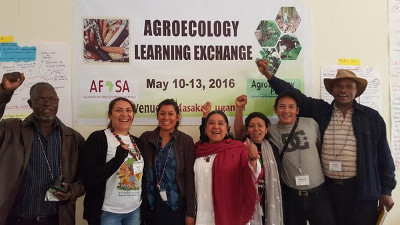 Five members representing La Via Campesina, attended the Agroecology Learning Exchanges in Uganda, held between 10-13 May 2016. This meeting was organized by the Agroecology Fund and Alliance for Food Sovereignty (ASFA) in Africa in Masaka, Uganda and was hosted by St Jude Family projects.

In a series of interactions and presentations to facilitate an understanding of the different efforts by various groups to scale up agroecology, representatives of LVC spoke about the emphasis given to setting up of Agroecology schools; details about the Mali Agroecology Forum to articulate what agroecology is and what it is not; details of actions resisting industrial agriculture; efforts to defend agroecology from co-optation; details about research and publication of successful cases within LVC and many instances of successful collaboration with allies such as ETC and Grain.

The team also spoke about seed saving efforts, marketing and other experiences on the ground. The participants toured St Judes Agroecology Training Center and experimental farms, where the meetings were simultaneously taking place.

“We also visited the field of one other farmer who were part of the St Judes community and local farmers’ organization. It was interesting to hear the story of St Jude, which from its humble beginnings has expanded to a well-established training center run by a peasant widow and her family and a few staff.  St Jude has trained hundreds of farmers to transition to agroecology.”, says Ashlesha from Karnataka Rajya Raita Sangha, one of the participants.

The participants also reflected on strategies to promote agroecology by strengthening farmers organisations. Need for regular farmer-to-farmer trainings, creating linkages to local and traditional markets, expansion of agroecology schools, developing community seed banks were among the many suggestions that the group put forth.

“It was useful to know what others were doing and to link up with groups from other regions. We need more collaborations like this to take agroecology forward”, added Nelson Mudzingwa of ZIMSOFF, a member of La Via Campesina.

The participants also acknowledged the role of agroecology schools must play in strengthening those movements and organisations.

Members of KWPA and ATC also represented La Via Campesina at this learning exchange.