Home » FAO opening: Via Campesina farmers to the heads of states: Time to change food policies! 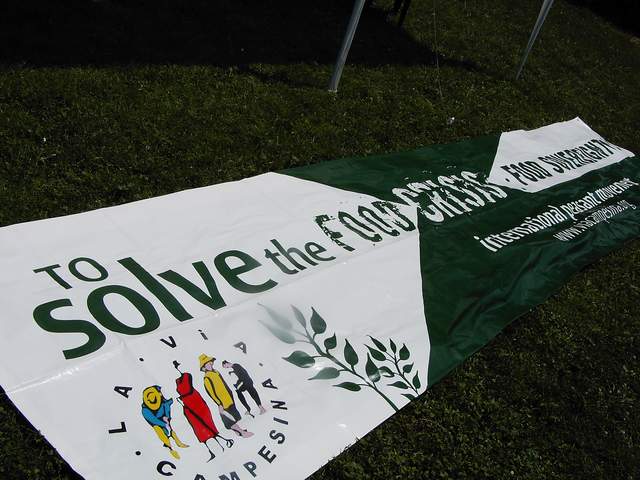 (Rome, 3 June 2008) Now that the FAO expects that hunger will affect an extra 100 million people by the end of the year, heads of states and leaders from around the world are gathering in Rome for the FAO “High-Level Conference on World Food Security: the Challenges of Climate Change and Bioenergy”.
The international peasant’s movement Via Campesina welcomes this sudden high level interest in food and agriculture production, but reminds governments and international institutions that the current climate and food crises are not the result of any sudden natural disaster. They are the fruit of decades of policies of trade « liberalisation » and of the vertical integration of production, processing and distribution by corporate agriculture.
Therefore, governments today have to take full responsibility for the current crisis and take resolute actions to solve it.

Even though they produce food, most family farmers suffer from the current high food prices alongside urban workers. Many of them do not own the land they farm, they produce for export or to pay off they debt, so essentially they work as agricultural labourers.

For decades, countries have been forced to open their markets and import food. They have lost their capacity to feed themselves which has made them excessively dependent on the world market’s prices. This has contributed to the recent hunger riots in various parts of the world.

Under the principle of « free trade », food is now considered a commodity like any other, subject to profiteering and financial speculation. The current price hikes are mainly due to speculation by major traders and investors because food production is now competing with agrofuels, which worsen the crisis, as does climate change.

Moreover, governments have dismantled the agrarian policies that sustained food production and instead have supported transnational companies producing seeds, pesticides, fertilisers and food to strengthen their control over the food chain. The development of industrial agriculture has destroyed the environment, overexploited soils and greatly contributed to global warming (generating from 17.4 to 32% of green house gases). Meanwhile, family farmers have been pushed from their land and driven into poverty. Based on that experience, farmers and small food producers are now rejecting the promises of the so called « New Green Revolution » and « miracle » seeds such as GMOs.

Small family farmers and food producers in the Via Campesina deplore the fact that the participation of civil society at the FAO high level conference is being denied. They are telling heads of states today that it is high time for governments to focus on small scale sustainable food production and local markets. This will allow soils to regenerate, conserve fuel and reduce global warming. It will also give jobs to millions of farmers, fisher-folks, pastoralists and all those who are feeding the people of the world.

– Notes to the media