Thursday, May 30th, hundreds of thousands of individuals including Korean Peasant League (KPL) and Korean Women Peasant Association (KWPA) as well as various other groups gathered at plazas in front of Seoul City Hall and Cheonggae Square, both of which are in downtown Seoul, holding a candle in one hand and placards criticizing the deal of U.S beef imports, which will be available to consumers as early as next week. The protestors chanting “Nullify the beef deal”, “Eat the mad cow yourself Lee Myung-bak” and “Impeachment”. 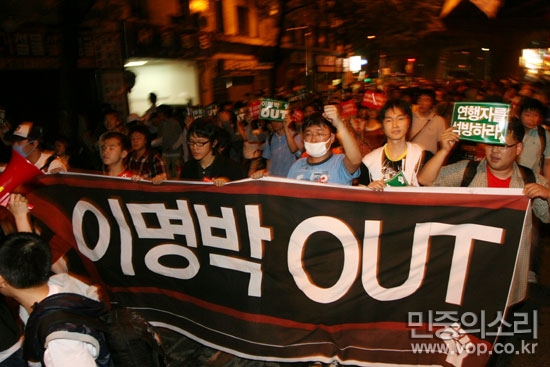 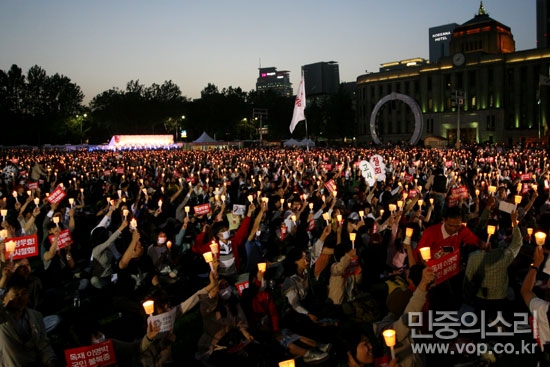 For one month in May, every evening, people have been gathering and protesting against import of mad cow from US. The beef import was one of the prior conditions that US government imposed to Korean government to start negotiation of Kor-US FTA.

After the government’s decision, the protest started to be held at Cheonggae Square and more and more participants have increased every night.

Since last one month, a lot of lies which the government made to people about the result of the negotiation with US have revealed. And then the protestors called for the dismissal of Minister of Food, Agriculture, Forestry and Fisheries and three opposition parties accepted the voices from people and submitted to the National Assembly the call. Unfortunately it failed.

Even over 80% people and opposition parties oppose to import US beef, yesterday the government announced the resumption. The US beef import will make the local cattle farmers bankrupt and it will threaten public health.

Thousands of riot police and armoured vehicles with teargas launchers were dispatched. This has caused severe traffic congestion. Police detained protesters who occupied streets. Police arrested 21 farmers member of KPL who organized the protest in front of the Blue House in Seoul.

The protest still occur across the country and every evening farmers organized the candle light vigil with deman on “No Mad Cow!” and “No FTA!”